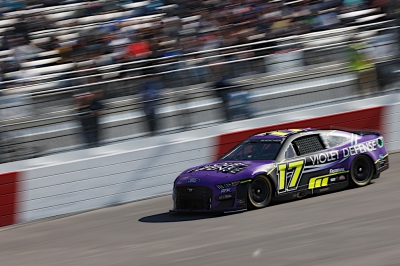 When it comes to on track success, it’s no secret that Chris Buescher and Richmond Raceway haven’t gotten along well in the past. Sunday a new leaf was seemingly turned as the 29-year-old from Prosper, TX, battled in and out of the top-10 throughout much of the 400 lap event.

Starting in the 18th position, Chris and crew chief Scott Graves rolled into the event optimistic after success at Phoenix Raceway, a track similar in character to Richmond Raceway. The No. 17 Violet Defense Ford was able to learn the track early, making up two positions to finish a short stage one in the 16th position.

After pitting during the stage break, Buescher restarted stage two from the 15th position, climbing and clawing his way up inside the top-10 on old tires. With a caution-free stage two, Buescher came up just shy of earning stage points with an 11th-place finish.

The start of stage three would bring 140 laps to go in the race, with the No. 17 Ford restarting from the 12th position. A string of two cautions for incident – the only two of the race – would follow the restart, bringing Buescher down pit road under caution for one of his final three stops on the day.

The remainder of stage three would run green with a plethora of varying strategies between teams. In the final handful of laps, Buescher was able to gain a handful of positions to finish in the 15th position.

Buescher and the No. 17 team return to action next weekend at Martinsville Speedway. Race coverage next Saturday night is set for 7:30 p.m. ET on FS1, MRN, and SiriusXM Channel 90.