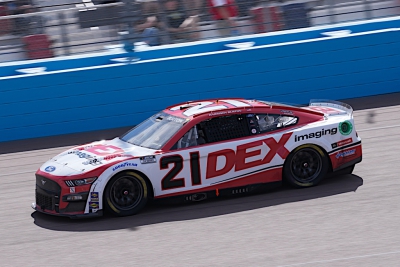 With the introduction of the NextGen car, and some new drivers on the circuit, the 2022 Cup Series season has been one of significant change. This weekend’s race at Atlanta Motor Speedway offers a new element of uncertainty.

The 1.5-mile track, one of NASCAR’s cornerstone facilities, has undergone a major transformation in the offseason.

The track, which has hosted NASCAR’s elite series since 1960, has been repaved and reconfigured. The banking in the turns has been increased from 24 to 28 degrees and the width of the straightaways has been narrowed from 55 to 40 feet in the turns and 42 feet on the backstretch, while the frontstretch has been widened to 61.5 feet.

For this weekend’s Folds of Honor QuikTrip 500, NASCAR has decided to use the Daytona/Talladega 510-horsepower package and the Daytona aero package with the seven-inch Daytona spoiler.

While some, including AMS officials, are saying Sunday’s race might resemble one at a superspeedway like Daytona or Talladega, Harrison Burton, who will drive the No. 21 DEX Imaging Mustang at Atlanta, said he believes the race will be more like the 2018 All-Star Race at Charlotte Motor Speedway. That race was run using a handling package similar to the one that will be used at Atlanta this weekend.

“I think Atlanta will more or less mirror the All Star race from a few years back at Charlotte where it was more of a pack race,” Burton said. “It’s going to be a challenge to find out for sure.”

Burton said the pre-race practice session on Friday will be key to having a good-handling car in Sunday’s 500-miler.

“We will have to be adaptive to a lot,” he said.

Friday’s practice session is set to start at 5:05 p.m., with qualifying scheduled for Saturday at 12:30 p.m.

Sunday’s Folds of Honor/QuikTrip 500 is set to get the green flag just after 3 p.m., with TV coverage on FOX.