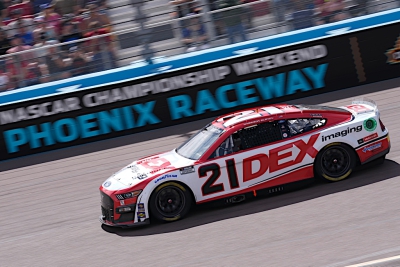 A long day in the desert for Harrison Burton and the No. 21 DEX Imaging team ended with a disappointing 29th-place finish in the Ruoff Mortgage 500k at Phoenix Raceway.

Burton was set to start the 312-mile race from 24th place, but as the DEX Imaging team was preparing the No. 21 Mustang there was an issue with the ignition switch.

The crew replaced the switch, but NASCAR considers that an unapproved adjustment, and the penalty for that is having to start the race from the rear of the pack.

Burton struggled to find speed from the start. He was running 31st when the Competition Caution flag flew at Lap 25.

Crew chief Brian Wilson and the DEX Imaging team began making changes to the No. 21 Mustang in an attempt to improve performance, but few of the changes delivered much improvement.

Burton was running 29th at the end of Stage One, and since he’d pitted for fresh tires and fuel just 10 laps earlier, the decision was made to stay on the track during the ensuing caution flag and grab some much-needed track position.

He lined up sixth for the restart and ran in the top 10 for a few laps but eventually faded to 25th during a long green-flag run.

A brush with the outside wall just past the 100-lap mark compounded the team’s problems and relegated them to 29th place, one lap behind the leaders.

There was little change for the remainder of the race, other than the loss of two more laps, which made any potential strategy moves unlikely to succeed.

“We had to start in the rear and fought it all day,” Eddie Wood said. “We struggled with it all day. The changes made it better at times, but we never got it where it should be.

“We’re a lot better race team than what folks saw today. We’ll put this weekend behind us, move on to next week and put every effort into having a strong run.”

Burton and the No. 21 team now turn their attention to the fifth points-paying race of the Cup Series season – next weekend’s 500-miler on the repaved and reconfigured Atlanta Motor Speedway.