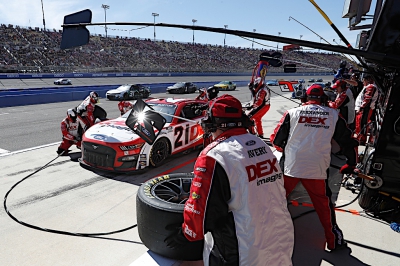 A late-race crash left Harrison Burton and the No. 21 DEX Imaging Mustang with a 33rd-place finish in Sunday’s Wise Power 400 at Auto Club Speedway in Fontana, Calif.

Burton started the race from 22nd place and quickly moved into the top 20, but he and the DEX Imaging team struggled to find speed as the race went on.

The team made adjustments, some of which delivered slight improvements while others were unsuccessful.

For much of the race he ran on either side of 20th place, and finished both of the 65-lap Stages in 21st place.

Any hopes for a decent finish ended when he was involved in a multi-car crash on Lap 157.

Just after a restart, as the pack exited Turn Two, drivers began spinning ahead of Burton and he was unable to avoid contact with the No. 23 of Bubba Wallace. The DEX Imaging Mustang was too damaged to continue.

“It just looked like they stacked up in front of us there,” Burton told reporters at the track. “I don't know how many crashed, but there was a lot of smoke, and I couldn’t see where I was going.

“I kind of had to take a guess on where they wouldn’t be and ended up finding the 23.”

Burton said he was disappointed with the lack of speed that left him running in the back when he crashed.

“It was a frustrating day,” he said. “It felt like we weren’t running as well as we needed to be anyway.

“I guess those things happen when you don't have great track position. We were fighting in the teens and 20s all day, and we need to be fighting further up to be able to avoid that mess.”

Among the few bright spots on an otherwise disappointing day for Burton was hearing the news that Team Penske’s Scott McLaughlin, who races in IndyCar with sponsorship from Burton’s long-time backer, DEX Imaging, won that circuit’s season opener in St. Petersburg, Fla., earlier in the afternoon.

Burton and the No. 21 team, after failing to finish the first two races of the season, will try to turn that around next week in the Pennzoil 400 at Las Vegas Motor Speedway.