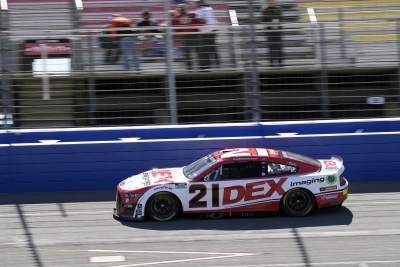 Harrison Burton and the No. 21 DEX Imaging Mustang will start Sunday’s Wise Power 400 at Auto Club Speedway from 22nd place.

Burton earned that spot with a lap at 171.473 miles per hour in Saturday’s qualifying session.

His speed was an improvement from his best lap in practice, which was at 168.287 mph. He posted that speed on his seventh of 18 laps run in the session. It put him 23rd on the speed chart.

He was 14th best among drivers in the speeds posted on a 10-lap consecutive run. His average speed of 165.366 mph came on the sixth through the 15th laps he ran in that session.

Saturday’s practice and qualifying sessions were challenging for many Cup drivers, even the veterans, as they were returning to the Fontana track for the first time in two years and having to adapt to a new Next Gen race car.