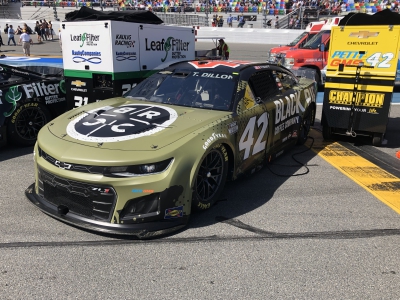 DAYTONA BEACH, FLORIDA - FEBRUARY 20: The No. 42 Black Rifle Coffee Company Chevrolet of Petty GMS Motorsports' Ty Dillon sits on pit road prior to the start of the 64th running of the Daytona 500. (Photo by Jason Guth/Speedway Digest)

DAYTONA BEACH, Fla. – For the second offseason in a row, Ty Dillon didn’t know if he would have a ride. Flashback to the end of 2020 and the closing of Germain Racing when they sold their charter to 23XI Racing, leaving Dillon unsure of his plans for 2021.

As it were, he was able to secure four races with Gaunt Brothers Racing in Cup, several races with Joe Gibbs Racing, Jordan Anderson Racing and Our Motorsports in Xfinity, and one additional race in Trucks with Bret Holmes Racing.

Not having that full-time job title was taxing to the point where he didn’t know if he should simply give-up on his career. It also meant what “part-time” has always meant in racing: He had zero assurances of being able to run a full season in any series moving forward.

Waiting anxiously once again throughout the offseason leading into 2022, the 30-year-old Dillon eventually heard the news any driver in his position yearns for – a full-time Cup ride was waiting for him at Petty GMS Motorsports.

Petty and longtime Xfinity and Truck team owner Maury Gallagher announced in December that Gallagher would buy a majority stake in Richard Petty Motorsports. The merger meant the team would field a second car in addition to Erik Jones after Petty’s second charter reverted back to the team from Rick Ware Racing’s No. 51 following their lease agreement for 2021.

Because it is a chartered car, Dillon knew he was locked into this year’s Daytona 500, a far cry from a season ago when he missed the field by one position in his Duel race as an open car.

So, coming into 2022 with both a sense of renewal and security, Dillon isn’t taking this opportunity for granted. That couldn’t have been more evident than in his comments after an eventful Busch Light Clash at the L.A. Coliseum two weeks ago.

There, he was perhaps the brashest driver that used his front bumper the most. As Fox Sports’ Mike Joy put it, “Ty Dillon has hit everything but the lottery today!”

If that quip weren’t unflattering enough, making matters worse for Dillon was his disqualification in the Clash's last-chance qualifying race after jumping the final restart.

A rough start to the season meant Dillon had something to prove in his return to full-time Cup action on Sunday.

Talk about a familiar story for a driver who has long been served a cold dish of nepotistic remarks, being that he is the grandson of legendary car owner Richard Childress.

Not to be deterred, Dillon was able to survive the usual hectic nature of the day on Sunday, waiting patiently around the back-half of the top-20 for most of the day until finding himself just outside the top-10 in the closing laps.

While he wasn’t able to seal the deal and earn his second Daytona 500 top-10, the 11th place finisher was satisfied with the strong result for he and his new team.

“Our Camaro was fast all day, just a matter of staying out of it and getting the day that we wanted.

“We accomplished our goals today, so it’s a good start to our year.”

Reflecting on the gravity of the day – amid all the uncertainty of the last two years – Dillon was simply grateful:

“To not even know if this year was going to happen again – be in this race again – to have an awesome team like Petty GMS and get our foot started in the right direction … I’m so happy.”

Dillon will look to build upon a positive first race during NASCAR’s “West Coast Swing,” beginning at Auto Club Speedway in Fontana, California, this Sunday.