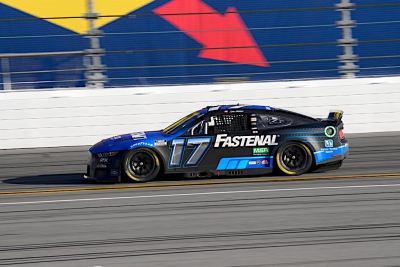 Chris Buescher spent much of Sunday’s Daytona 500 near the front of the field and was in position for a late move, but was collected in a multi-car incident with four laps remaining to ultimately finish 17th.

Buescher had a solid view to start the famed 200-lap race, lining up fourth after his win Thursday in the second of two duel qualifying races – both of which RFK won. His teammate, Brad Keselowski, took the lead on lap one, and the duo ran 1-2 for a while, and for much of the day were together inside the top five.

The Fastenal team pitted with just over 10 to go in the opening stage, giving up their early track position, but would flip that to begin stage two, rolling off third for the second, 65-lap segment. Green flag stops were the story in the caution-free second stage, where the two teammates took over first and second with Buescher going on to finish the stage in seventh.

Buescher kept his Fastenal machine clean through a number of incidents in the final segment, but couldn’t avoid the last one, and ultimately sustained damage on his right side to finish 17th.

The NASCAR Cup Series heads to Auto Club Speedway next weekend in California for the first of three-straight races on the West Coast. Track activity begins Saturday morning with practice and qualifying, with Sunday’s race set for 3:30 p.m. ET on FOX, MRN and SiriusXM.