Burton 10th in Pole Qualifying for the Daytona 500 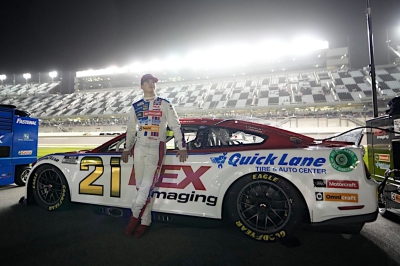 In his first qualifying attempt since taking the wheel of the No. 21 Motorcraft/DEX Imaging Mustang, rookie Harrison Burton advanced to the second round of qualifying for the Daytona 500 and wound up with the 10th best time. He also was the fastest rookie in qualifying.

Burton’s lap at 179.508 miles per hour in the second round means he’ll start fifth in the second of two Duel qualifying races Thursday night. (In Daytona 500 qualifying only the top two drivers secure their starting spots for Sunday’s race.)

In the opening round Burton was one of two Ford drivers to advance to the second round. His lap at 179.501 mph was eighth best on the speed chart in that session.

Eddie Wood said Burton’s strong start to Speedweeks should help the youngster as he heads into the rest of the week.

“I think it will take a load off his mind,” Wood said.

The Daytona 500 is scheduled to start just after 2:30 p.m. on Sunday with TV coverage on FOX.