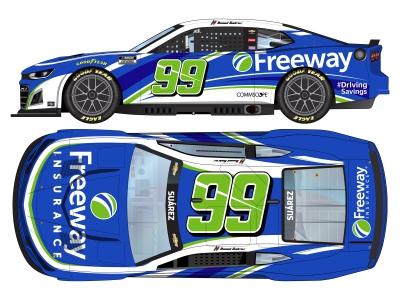 Just like everyone else, No. 99 Freeway Insurance Chevrolet driver Daniel Suárez doesn't really know what to expect Sunday when the 2022 NASCAR Cup Series season kicks off with the season-opening Clash exhibition race at the Los Angeles Memorial Coliseum.

It is a race of firsts for NASCAR as well as Suárez who will drive Trackhouse Racing's Next Gen Chevrolet for the first time in competition. Trackhouse owner Justin Marks' acquisition of Chip Ganassi Racing's NASCAR assets in the off-season added Ross Chastain to the driver lineup giving Suárez his first teammate since 2019.

It's not a normal start to the season.

Sunday's Clash is to be contested around a quarter-mile asphalt oval that will be built around the Coliseum's football field. The venue has hosted two Olympic Games will add NASCAR Cup Series racing to its 98-year-old portfolio this season.The Los Angeles event will mark the first time the preseason Clash will be held outside of Daytona International Speedway since its inception in 1979.

Even the pre-race will peak Suarez's interests. Trackhouse team partner Pitbull will play a 45-minute concert inside the Coliseum before the Clash Sunday.

The track and format are sure to create drama. Fox will televise the qualifying heat and last chance races through the main event beginning at 3 p.m. ET.