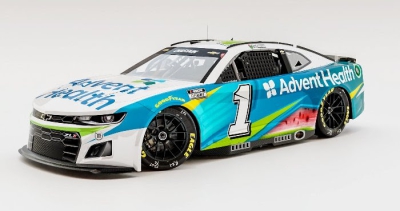 AdventHealth and Trackhouse Entertainment Group are joining forces in 2022 to field the No. 1 AdventHealth Chevrolet Camaro for driver Ross Chastain in six NASCAR Cup Series races including the season-opening DAYTONA 500 – the sport’s premier event.

The 64th annual race is the highlight of DAYTONA Speedweeks Presented by AdventHealth.

The announcement came Tuesday in Daytona Beach as the Cup Series drivers tested the sport’s new Next Gen cars at Daytona International Speedway in preparation for the DAYTONA 500.

With 50 hospitals in almost a dozen states, racetracks like Daytona, Charlotte, Kansas and Atlanta are all located within an AdventHealth market and nearby facility.

“As a Florida native, I couldn’t be happier to have AdventHealth join us at Trackhouse Racing,” said Chastain who has worked with AdventHealth the past two seasons. “I have gotten to know the AdventHealth people over the last few years and learned about the important work they are doing for my home state as well as many of the race markets we visit.”

“We’re very proud to continue our support of NASCAR and Ross Chastain by partnering with Trackhouse Racing for the 2022 season,” said David Banks, chief strategy and organizational transformation officer for AdventHealth. “Our team members are also excited to once again care for drivers and fans at Daytona International Speedway during Speedweeks and all season long.”

The AdventHealth injector – or gate entrance – at the track is a 20,000-square-foot-oasis. The hospital system’s injector features messages of health, well-being and wholeness, as well as interactive games that naturally tie the sport of racing to health and wellness, testing race fans’ hand-eye coordination – a vital skill on the racetrack.

Catwalk for a Cause

Also, during Speedweeks Presented by AdventHealth in Daytona, AdventHealth will be the beneficiary of the Martin Truex Jr. Foundation’s Catwalk for a Cause charity fashion show on Saturday, Feb. 19 at ONE DAYTONA. The foundation works to raise money to improve the lives of children with cancer, women with ovarian cancer and the individuals and families affected.

For the past 11 years, the Martin Truex Jr. Foundation has hosted their signature event, Catwalk for a Cause, in the Charlotte, North Carolina area. Catwalk was created by Sherry Pollex, ovarian cancer survivor and long-time partner of NASCAR Cup Series driver Martin Truex Jr., as a way to put the spotlight on childhood cancer heroes for a night of fun and philanthropy. In 2022, the Catwalk vision has been expanded, including a new location in Daytona Beach with a focus on the brave women behind a gynecological cancer diagnosis. These women will strut the runway alongside prominent women in NASCAR to create an unforgettable night for all.

A portion of the proceeds from Catwalk Daytona Beach will go towards the building of a brand new SherryStrong Integrative Medicine Clinic with AdventHealth in Daytona Beach. The clinic will serve as a holistic center that will address the physical, emotional, spiritual, and environmental needs of cancer-patients to promote health and wellness, regardless of their ability to pay.

Since its inception in 2010, Catwalk has continued to grow each year while raising over $4 million for cancer initiatives.

Trackhouse Entertainment Group headquartered in Franklin, Tennessee is a burgeoning sports and entertainment enterprise with plans to marry the cultures of music and motorsports. It owns Trackhouse Racing, a two-car Cup Series team headquartered in Concord, North Carolina that fields race cars for Chastain and his teammate Daniel Suárez.

“Bringing AdventHealth on board is important to Trackhouse Racing as well as the sport in general,” said Marks. “We know the world we live in today. Never has a company like AdventHealth been more important to society. We hope through this relationship we can educate a lot of race fans about the importance of good health and have a lot of fun along the way.”