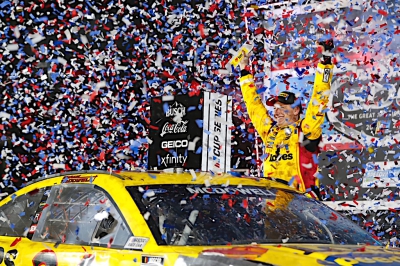 Earlier this year, Front Row Motorsports was contacted by Nathan Romberg, a journalism student at the University of Wyoming who lives and champions those who live life on the spectrum. Romberg is a big fan of Michael McDowell, the No. 34 team, and NASCAR as a whole, and as such, has focused on the team’s historical season and written how he viewed it. He also received feedback from McDowell and crew chief Drew Blickensderfer on how they viewed their year.

The following is told by Romberg:

It’s the last lap of the Daytona 500 – NASCAR’s biggest race – and you are in the driver’s seat, running third, with a long line of cars behind you. For years, you have worked for this moment, to have a chance to reach the famed checkered flag first, not just for the 500, but for any NASCAR event.

Rounding Turns 1 and 2, you get a push from behind to reach the two competitors standing between you and racing immortality. That bump just got forces you into the car in second as the field heads down the backstretch. You see that car get loose and turn around the car in first. It’s as if the sea has parted in front of you. After 358 tries, you’ve finally done it. You’ve won the Daytona 500 and your first NASCAR Cup Series event.

It may be crazy to think, but for Michael McDowell and the No. 34 Love’s Travel Stops Ford team, this very scenario played out in February to start their 2021 NASCAR Cup Series season.

Looking back at that night, McDowell had a similar evaluation. “We felt like we were in a good position all night. We worked so well with the Ford team, had good pit stops, made no mistakes and it all came together on the last lap. The excitement happened in real time. We took the lead and the checkered. So, we knew we were probably going to be called the winner by NASCAR. Then, they did, and it’s all excitement.”

For them, it was just the start of an incredible and consistent season of growth. With a win, playoff appearance, two top-fives and seven top-10 finishes this season, McDowell and the No. 34 team have found ways to improve their race team’s performance and allow for much bigger growth in the future.

After the team’s unexpected Daytona 500 win locked them into the playoffs (win, and you’re in), McDowell and the No. 34 team proved that their performance at the 500 was no fluke, netting an eighth-place finish at the Daytona Road Course the following weekend and a sixth-place result at Homestead-Miami Speedway the week after that. While a lack of qualifying on account of COVID-19 protocols meant that the field was set by metric from past race performances, the No. 34 team showed that they did belong with the big dogs.

Having already had a strong start to the season, McDowell and the team were also rewarded with an appearance in NASCAR’s All-Star Race in Texas in June as a result of the Daytona 500 win. For the Love’s crew, it provided a bit of a fun break from the stresses of regular-season points racing – after all, who wouldn’t want to race for a million dollars? As McDowell puts it, “It’s just a lot of fun. That’s a race for the fans to enjoy. So, you’re looking to put on a good show. It’s cool to be a part of it, but it’s really all for the fans to see something different.” While they didn’t win the million, finishing 12th ahead of some of NASCAR’s other biggest names was rather impressive. And they could build on that when they visited Texas again in the fall.

As the 2021 season progressed into the summer months, McDowell and the Love’s team began to settle into a rhythm - though it was not without its struggles. Despite finishing third at the Talladega Superspeedway and seventh at the Circuit of the Americas in Austin in May, bad luck and some poor races hurt the team’s momentum heading into the playoffs, including a late race wreck at the Indianapolis Road Course. The team had high hopes in their return to Daytona in August, but engine troubles prevented them from possibly sweeping the Daytona oval events. It left the Daytona 500 champions with a bit of a mixed bag entering the playoffs.

McDowell’s crew chief, Drew Blickensderfer, said: “For us, as a smaller team, we were proud to have had such a strong start to our season. We lost some momentum in the summer, but we had a fast car to start the Playoffs. We just had misfortune. But, overall, we’re very proud of the steps we took. We just want to be to more consistent.”

Entering the NASCAR Playoffs at Darlington in September, the No. 34 team was seeded 13th in points out of the 16-driver playoff grid based on their win and consistent performances early in the season. As they only needed to pass one car in points to make it into the next three-race round of 12, spirits were high. As Blickensderfer mentioned, McDowell’s crew had built quite the Ford Mustang for him at the Southern 500 in Darlington, the Labor Day weekend opener for the playoffs.

“We have pressure every week to give Michael the best car. So, we’re always working hard to get better. During the Playoffs, we had fast cars. We’re proud of that.”

Even then, the team’s mid-season struggles found a way to continue into the playoffs. An early wreck at the Southern 500 left McDowell and the Love’s team in a must-win scenario, and a series of compounding pit road penalties at Richmond the following week did not help. Despite this, McDowell and the No. 34 crew soldiered on, doing their best to get a win and advance to the round of 12 at Bristol. As Blickensderfer puts it, “You just move on, learn and try and get better for the next time.”

While failing to advance to the next round, the No. 34 team and McDowell have been able to mount some strong finishes to close out the season and return to their spring highs, with four straight top-20 finishes at Talladega’s fall race, the Charlotte Roval, Texas (repeating the strong success of their All-Star run there in June), and Kansas. In addition, considerable improvements with their mile-and-a-half program has allowed the team to look toward an even brighter and more successful 2022. Could that include more wins in the Next Gen car and a stronger or deeper playoff run? Well, if you ask McDowell about it, he seems pretty confident. And why wouldn’t he? He is the defending Daytona 500 champion, after all.

“We hope so! That’s always the goal. I do like the Next Gen car, the schedule and I think it fits my strengths. It’s hard to win, but I think we can put up front and compete.”

Even then, no one really knows for sure, as there still are some logistical headaches that come with a new car. As McDowell said: “This will put everyone on an equal playing field, but we’re still faced with the same challenges of relying on simulation, setup, and data. So, we’ll have to continue to work hard with the group we have. But, I like our guys.”

For now, McDowell and the No. 34 team can still look back at that Sunday night in February as a good omen for what lay ahead for them in 2021 - and even into 2022.