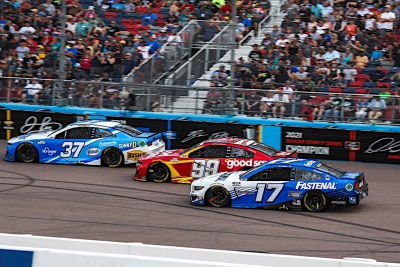 In the final race of the 2021 season Sunday at Phoenix Raceway, Chris Buescher drove his Fastenal Ford Mustang to a 25th-place finish.

A rare qualifying session Saturday afternoon put Buescher 26th on the speed charts for Sunday’s 312-lap race. Despite a decent amount of cautions throughout the afternoon, they mostly fell at inopportune times for Buescher, who was unable to battle back from going a lap down early.

He would finish the opening 75-lap stage in 25th as the team worked on his handling in the No. 17 Ford. Buescher went on to finish 25th for stage two, a segment where he was able to get the free pass and get back to one lap down.

He was in the same position late for the free pass, but a cycle of green-flag stops began just laps before a caution flag, ultimately trapping him laps down again with others receiving the free pass. The race’s final restart came with 24 to go as Buescher finished the afternoon 25th.

Rate this item
(0 votes)
Tweet
« Newman Finishes 23rd in Final Race in No. 6 Erik Jones Finishes in the 22nd-place at the Phoenix Raceway »