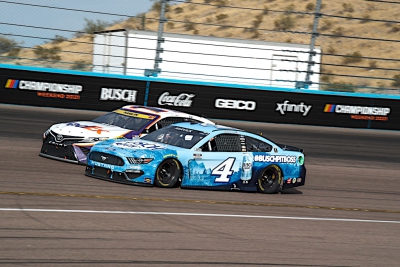 ●  The No. 4 Busch Light #BuschPitBoss Ford Mustang for Stewart-Haas Racing (SHR) proved strong, with Harvick up to fifth by lap eight.

●  A caution on lap 16 allowed Harvick to pit for four tires and fuel on lap 17. While he gained two spots on pit road, a handful of other drivers elected to stay out.

●  By lap 26, Harvick was back up to fifth and his march toward the front continued. He passed Brad Keselowski for fourth on lap 27, Chase Elliott for third on lap 34 and Kyle Larson for second on lap 35.

●  Harvick soon chased down race leader Ryan Blaney, and after a spirited battle between them during laps 42-48, Harvick finally took the lead on lap 49.

●  The battle continued, however, with Blaney retaking the lead on lap 50 before Martin Truex Jr., led the final 25 laps of the stage.

●  “As I run, I can’t put the throttle down. Just need more drive off (the corner),” said Harvick at the end of the stage.

●  Pitted for four tires and fuel at end of the stage, with the only adjustment being to tire pressures.

●  The No. 4 Busch Light #BuschPitBoss Ford Mustang was a steady presence in the top-five, running a comfortable fourth after 100 laps.

●  “The exit (of the corner) is better, but I still need more,” said Harvick while running third on lap 126.

●  Caution on lap 130 allowed Harvick to pit for four tires and fuel on lap 131. Tire pressures were the only adjustment.

●  Lined up second for the lap-135 restart, but Larson was able to take the spot on the following lap, sending Harvick back to third.

●  Harvick was fourth when the caution came out on lap 156, allowing him to pit on lap 157 for four tires and fuel.

●  The No. 4 Busch Light #BuschPitBoss Ford Mustang was ninth for the lap-162 restart.

●  Harvick maintained sixth place through the end of the stage and then pitted for four tires and fuel with another round of tire pressure adjustments.

●  With 100 laps remaining in the race, the No. 4 Busch Light #BuschPitBoss Ford Mustang remained solidly in fifth.

●  Caution on lap 249 allowed Harvick to pit for four tires and fuel with a track bar adjustment.

●  Lined up seventh for the lap-255 restart and held that spot through lap 271 before passing Joey Logano for sixth.

●  Caution on lap 284 gave Harvick the opportunity to pit for four tires a fuel, but he came off pit road in 10th place.

●  Harvick rallied to eighth in the final laps to score his 24th top-10 of the season.

●  Harvick’s 24 top-10s in 2021 is the third highest total among NASCAR Cup Series drivers. Only Kyle Larson and Denny Hamlin earned more top-10s this season, with Larson securing 26 top-10s and Hamlin getting 25 top-10s.

●  Harvick’s 27 top-10s at Phoenix are the most among active NASCAR Cup Series drivers.

●  Harvick led one lap, increasing his laps led total at Phoenix to a series-leading 1,663.

●  Larson won the Season Finale 500 to score his 16th career NASCAR Cup Series victory, his series-high 10th of the season and his first at Phoenix. His margin over second-place Martin Truex Jr., was .398 of a second.

The 2022 season begins with the non-points Busch Clash on Feb. 6 at the Los Angeles Memorial Coliseum before kicking off its 36-race slate of points-paying events with the 64th Daytona 500 on Feb. 20 at Daytona (Fla.) International Speedway. FS1 will broadcast the Busch Clash at the Coliseum and FOX will broadcast the Daytona 500. Each event will be live and can also be heard on SiriusXM NASCAR Radio.