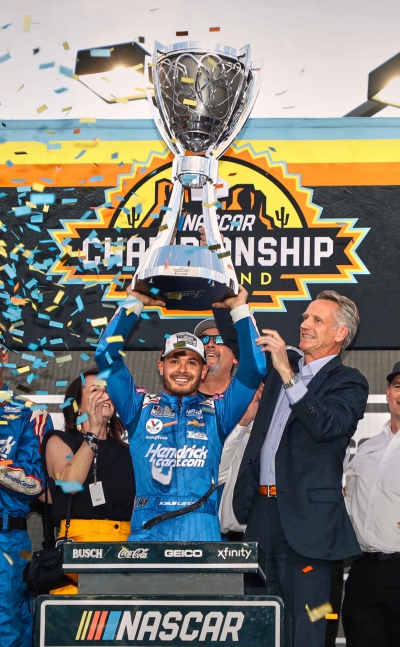 With his win on Sunday, Larson caps off what was one of the best seasons by a driver in series history.

“I cannot believe it,” Larson told NBC Sports post-race. I didn’t think I would be racing a Cup car a year and a half ago and to win the championship is crazy. There were so many points of this race where I did not think that we were going to win and without my pit crew on that last stop, we would nit be standing here. They’re the true winners this race. They’re the true champion. I’m just blessed to be apart of this group. Every single person at Hendrick Motorsports. This win is for all of us and every one of you.

An 11.8 second pit stop under yellow gave Larson the lead in the race’s final restart with just 24 laps to go.

Larson held off his fellow championship four drivers for the win.

Martin Truex Jr., who won the Cup series title in 2017 now has finished runner-up in points for the third time in the last four seasons.

“’18, ’19’, ’21 three years, we were right there and had a car capable of winning and just for whatever reason it didn’t go the way we needed it to,”Truex told NBC Sports post-race. “And at the end there not quite enough speed to get to Larson and around him. I thought if he’d stay on the bottom a little bit longer, id have a shot but he moved up and I couldn’t do anything on the bottom. It is what it is. They did a great job. They had a great season. Congrats to them. We’ll come back and try again next year,”

Larson is the third different driver to win a Cup series title in the modern era in his first season with a new team.

The 2022 NASCAR Cup Series season begins on February 6th with the Clash at the Los Angeles Memorial Coliseum. The first points paying race of the season is the Daytona 500 on February 20th on FOX.