Buescher Powers Through for Ninth in Martinsville 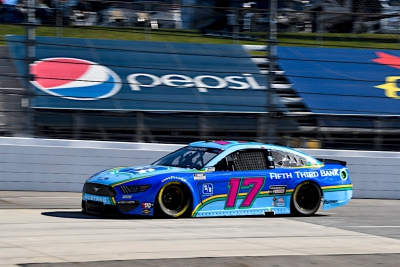 Patience and toughness are often the name of the game at the action-packed Martinsville Speedway, and Chris Buescher showed both Sunday afternoon in the Fifth Third Bank Ford driving his way to a ninth-place finish.

Overall 15 cautions flew in the 500-lap race, including one that set up a two-lap shootout to the checkered flag, with 11 of the yellows coming in the second half. Buescher rolled off the grid 15th, but the team worked on the handling all day, ultimately putting him in prime position late.

The Texas native ran 17th at the time of the race’s first caution – the competition caution – at lap 60, and would end the first stage in 18th. Solid work on pit road put Buescher back on the plus side of track position as he restarted the second stage in 12th before going on to end the segment in 14th.

From there, the longest green flag run would span only 53 laps. Buescher continued to claw his way forward and would restart 11th at lap 317, but nine cautions still stood between that and the end, allowing more opportunities to pick off positions.

He was scored ninth by lap 322, a spot he would hang onto for around 20 laps as multiple cautions flew every 10-15 laps for a while. After a pit stop under yellow at lap 379, Buescher restarted in the 16th spot for the lengthy green-flag segment, and toggled between there and 14th up until 50 to go.

With the handling in check, Buescher fought through a combined four restarts in the closing 50 laps to bring home a battered, but successful Ford Mustang. It marks his third top-10 in five races and eighth overall of 2021.

The 2021 season comes to a close next weekend at Phoenix Raceway, where Sunday’s race is slated for 3 p.m. ET on NBC, MRN and SiriusXM Channel 90. The weekend schedule also includes a rare practice session on Friday, followed by qualifying Saturday.