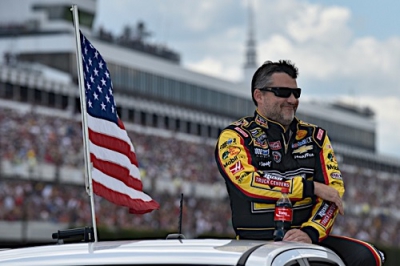 Tony Stewart is one of three drivers that took part in a Goodyear tire test at Bowman Gray Stadium on Tuesday. The purpose of the test is to find the right tire combination for the season opening exhibition race at LA Coliseum in February 2022. Dale Earnhardt Jr. and Clint Bowyer were also participants.

Bowman Gray Stadium is one of the oldest facilities in the country to host NASCAR sanctioned events. The track known as ‘Mad House’ does not currently host any national series races, however, is a stable on the local NASCAR tours.

“It was fun today to get a chance to come up here, to be invited by NASCAR to come up and do the tire test for the Coliseum race,” said Stewart. “This is a track I’ve only been to one time and got to watch the races. So it was pretty cool to be on track here. It was fun and to get a chance to drive the Next Gen car was cool too.

Stewart says Goodyear had a good plan going into the day and seemed happy with the results of the test.

“I think what they brought with the control set is probably a little harder than what they need. They brought a softer tire and they were pretty happy with it and I think that’s probably a combination of what they’ll bring out West.”

Today marked the first time in five years that Tony Stewart has driven a NASCAR Cup Series stock car. The three-time Cup Series champion added that it was fun to do something different and something he hasn’t done for a long time now.

Is this a precursor to something more?

Considering that it’s just a Goodyear tire test, probably not. If the exhibition race at the LA Coliseum proves to be a success, only time will tell whether the historic track will once again see a national series race.