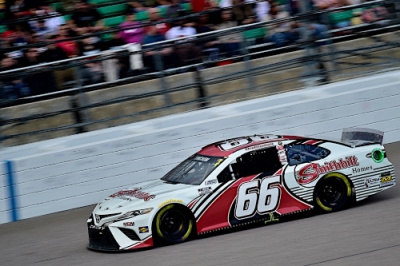 Here is the interview with Chad Finchuum after being sent back to the garage due to handling issues as well as not making minimum speed.

Me: Kaleb Vestal with Speedway Digest i’m with Chad Finchum, driver of the 66 Toyota Camry.  Out of the race early today Chad what happened out there?

Chad: Well you know we had a good early start there and we were driving good and all of a sudden man we just started picking up an issue. We came down pit road a couple of times to address the problem but couldn’t really find out what it was. We unfortunately were not making minimum speed according to NASCAR so we came back in the garage and looked at the car. It's unfortunate but it's been a roller coaster of a year for me as I've only been part time this year. I was excited to come back to Kansas Speedway, a place where I initially set my best finish in the Xfinity series a couple of years ago. I love this place and love the atmosphere around here and it's an honor to drive a cup car but the mechanical gremlins got the best of us.

Me: Will we see you at Martinsville next week?

Chad: No plans as of yet even though I really want to be but nothing as of yet.

Me Thank you Chad appreciate the time.