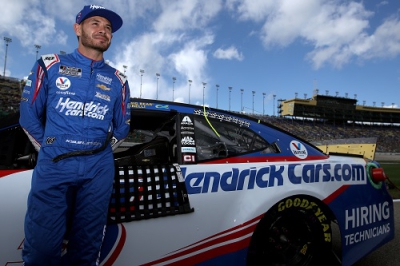 Kyle Larson parked his No. 5 Chevrolet into victory lane Sunday at Kansas Speedway for the ninth time of the season. Larson dominated the Hollywood Casino 400 from the pole by leading 130 of the 267 laps. The driver heads into the penultimate race of 2021 locked into the Round of 4 at Phoenix Raceway.

Chase Elliott leaves Kansas second in the standings after taking home runner-up on Sunday. The driver from Georgia started fifth and led 42 of the laps to capture his 14th top five and 20th top 10 finish in 2021.

Denny Hamlin was the next highest Playoff finisher in fifth. The driver of the No. 11 Toyota sits third in points leaving Kansas and will go into Martinsville Speedway looking to score his sixth victory there.

Martin Truex Jr. sat seventh at the checkered flag, earning his 18th top 10 finish of the year. The driver of the No. 19 Toyota for Joe Gibbs Racing leaves Kansas sitting sixth in points.

Joey Logano will leave Kansas with a ninth place finish in his No. 22 Shell/Pennzoil Toyota. Logano goes into Martinsville next week sitting eighth in points and desperately needing a win to advance. In 25 starts at the ‘Paper Clip’, Logano has one victory and eight top fives along with 13 top 10s.

Brad Keselowski finished 17th on the board Sunday in the Hollywood Casino 400 and will go into next week sitting seventh in the standings. Keselowski, like teammate Joey Logano, is in a must win situation to race for a championship at Phoenix.

Kyle Busch was one of two Playoff drivers to have frustrating days at Kansas Speedway. Busch, sitting fourth in points, was involved in an incident in turn one on lap 24. The Las Vegas native finished six laps down in 28th.

Ryan Blaney will leave Kansas with a 37th-place finish. Blaney started the day second and will go into Martinsville fifth in points. In 11 starts at Martinsville, Blaney has five top five and six top 10 finishes.