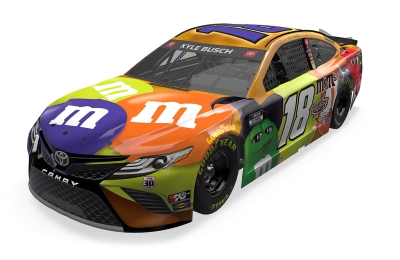 It’s October and, as usual this time of year, M&M’S has brought back its Halloween-themed No. 18 M&M’S Toyota for driver Kyle Busch during the next two NASCAR Cup Series races – this weekend at Kansas Speedway in Kansas City and the following weekend at Martinsville (Va.) Speedway – during one of M&M’S busiest seasons.

Busch and his M&M’S-themed Halloween “costume” first head to this weekend’s Hollywood Casino 400 at Kansas hoping for a win that would lock him into the Championship 4 at Phoenix Raceway Nov. 7. For his part, Kansas hasn’t been nearly as spooky over his last 14 races there as opposed to a vastly stark record in his first 13 starts at the 1.5-mile oval, during which he had eight finishes of 20th or worse.

The two-time Cup Series champion collected two top-five finishes in a row in the fall 2014 and 2015 Kansas races before he broke through for his first Cup Series win at there in May 2016. That’s when the surface finally started to wear and become more agreeable to Busch’s driving style. He now has 11 top-10 finishes in his last 13 starts there, a streak that at one point included five consecutive top-fives.

Even better news for Busch and the M&M’S Halloween team is they are the most recent Cup Series winners at the Midwest track in May as they scored their second career Kansas victory and first of two wins so far this season.

Sunday’s Cup Series race at Kansas marks the second race of the Round of 8 of this year’s playoffs. Busch’s stage win and eighth-place finish at Texas Motor Speedway in Fort Worth last weekend helped boost him to fourth in standings, eight points above the top-four cutline. Kyle Larson won last weekend’s race and is the first driver eligible for the Championship 4 at Phoenix. With a win at either of these next two events, Busch can join Larson at Phoenix for his shot to race for the title for the sixth time in his career.

So, as the Cup Series heads to the Heartland of America Sunday, Busch will aim to make it a 2021 sweep of both Kansas races and the championship implications that come with it. And with Halloween fast approaching, Busch and his No. 18 team would like nothing more than to take their colorful, Halloween-themed M&M’S “costume” to victory lane.