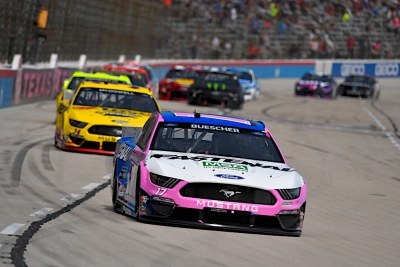 Chris Buescher had a top-15 run going in the Fastenal Ford Sunday afternoon at Texas Motor Speedway, before a late incident inside 10 laps to go spoiled the showing, relegating him to a 21st-place finish.

Based off his finishing result (third) a week ago, Buescher lined up 10th on the grid in his home state, giving him an early advantage in track position in the 500-mile event. The Prosper native had a fuel strategy play come up just short to end stage one, as he was forced to pit road on the final lap of the opening segment, putting him a lap down to the leaders.

He would spend a majority of the second stage trying to secure the free pass position, one he would ultimately capture to end the second stage, putting him back on sequence with the leaders and in the mix. A flurry of cautions over the final stage saw Buescher sneak into the top-10 by lap 303, before he made an impressive save with 30 to go. On a restart with Buescher in eighth, a car behind him forced the Fastenal machine sideways, but a save kept him in line as a caution came out just behind him.

Following the red flag for cleanup, three more cautions would be displayed with Buescher just outside the top-10 each time. Then, with under 10 laps remaining, Buescher made contact with the No. 14 car, sending him sideways into the inside wall, ending his day early.

The No. 17 team is back next weekend at Kansas Speedway, where race action Sunday is set for 3 p.m. ET on NBCSN. It can also be heard on MRN and SiriusXM Channel 90.