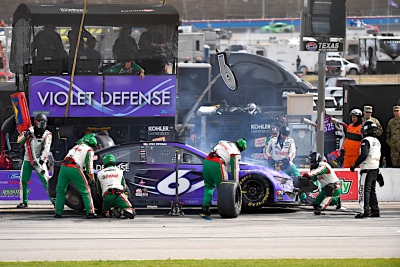 Ryan Newman’s afternoon at Texas Motor Speedway came to a halt early after a 15-car pileup just 30 laps in caused damage too severe on the No. 6 Violet Defense Ford.

Newman had worked his way to just outside the top-20 just 25 laps in, despite starting from near the tail end of the field. Just after the competition caution at the 1.5-mile track, the largest crash in TMS history occurred with Newman’s machine ultimately catching the brunt of the impact.

After the team worked tirelessly on pit road to get him back rolling, the damage was ultimately too severe, spoiling his afternoon.

The No. 6 team is back at Kansas Speedway next weekend, where Sunday’s race is set for 3 p.m. ET on NBCSN. It can also be heard on MRN and SiriusXM Channel 90.