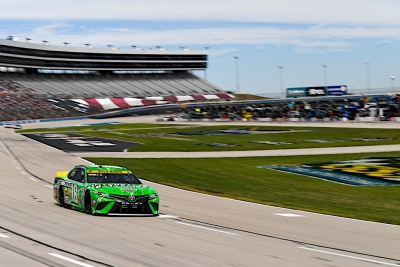 ● The Interstate Batteries driver jumped to second place once the field took the green flag. He maintained the position for a handful of laps before dropping to fifth place by the time the competition cautioned waved on lap 25.

● Green-flag racing resumed but not for long, as a big accident unfolded on the backstretch collecting multiple cars. Busch was able to avoid most of the melee, suffering only minor damage to the left-rear area of the car. He made a trip to pit road for tires and fuel, along with some sheet metal repair work. He lined up 26th for the restart.

● As the first stage came to a close, the majority of the field had to make their respective trips to pit road for tires and fuel. Because the No. 18 Interstate Batteries team had topped off multiple times prior to the long, green-flag run, they were able to stretch the fuel mileage.

● Busch took the lead on lap 96 and maintained the top spot to the end of Stage 1, collecting the victory and corresponding bonus points.

● During the caution Busch reported that the car was handling on the tight side, mostly in turns one and two. The team made some air pressure adjustments, changed four tires and added fuel. Busch won the race off pit road to line up first to start Stage 2.

● The two-time NASCAR champion lost the lead on lap 117 after a tight battle with driver Kyle Larson. He lost another position a few laps later before settling into a competitive pace in third for the next several laps.

● Busch was in third place on lap 148 when he reported that the Interstate Batteries racecar had started Stage 2 on the loose side. As the run continued, however, the balance on the car improved to a more neutral handling situation.

● On lap 162 Busch noted that the handling had started to trend to the tight side. Caution waved three laps later for debris.

● After making a trip to pit road for four tires and fuel, Busch lined up second for the restart. During the next several laps he proceeded to lose positions on the track, settling in at 10th place on lap 185. He reported that the car had no grip.

● Busch maintained the position to the end of the stage, finishing 10th.

● During the caution the team changed four tires, made a round of adjustments and added fuel. Quick pit work got Busch off pit road in seventh place to start the final stage.

● Green-flag racing resumed, and Busch lost a handful of positions during the opening laps of the final stage, dropping back to 10th place.

● Caution was displayed on lap 274 for a single-car incident. Busch was scored in 10th place. He reported that he needed the car to turn better and needed more speed.

● The team made some air pressure adjustments, changed four tires and added fuel. Busch lined up 10th for the restart.

● The Las Vegas native was scored in 10th place when a caution was displayed on lap 298. The first eight cars on the track stayed out, while Busch and a handful of others elected to pit. After a round of air pressure adjustments, four tires and fuel, Busch lined up 10th for the restart on lap 304.

● Caution came out quickly for a multicar accident that unfolded behind the No. 18 Interstate Batteries Toyota. It forced NASCAR to display the red flag for cleanup.

● Green-flag racing resumed on lap 309 with Busch in 10th place.

● A series of three more cautions went on to slow the race. Busch was able to avoid all of the issues and finish the race in eighth place.

“We were just off today. I don’t know how we missed it, why we missed it, or what but just taking off – there was just no grip whatsoever. We would just chatter the front tires, so we missed it today. The one positive of the day is that we are above the cut line right now to get to Phoenix. Thanks to Interstate Batteries. I appreciate all of their people that were with us today. I just feel bad that we didn’t do a better job. We have to go back to work. Next week is Kansas – same kind of thing.”