Suicide Prevention Front and Center on the 21 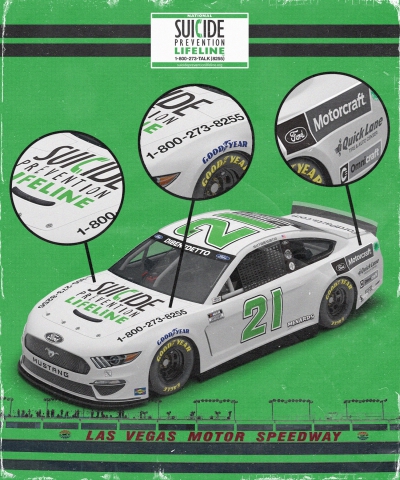 Matt DiBenedetto and the No. 21 Motorcraft/Quick Lane team are headed to Las Vegas Motor Speedway, hoping to recapture the magic from 2020 when they scored runner-up finishes in both Cup races. For this weekend’s event, they’re using the No. 21 Mustang to raise awareness for the National Suicide Prevention Lifeline during the entire month of September, which is #SuicidePreventionMonth.

Instead of the No. 21 Mustang carrying the usual colors of Motorcraft and Quick Lane, the paint scheme for Sunday’s South Point 400 will focus on the suicide prevention campaign.

Jon Orth, Marketing Manager for Ford Customer Service Division, recently lost a close friend to suicide and spearheaded the effort to use the car to promote suicide prevention and to publicize the National Suicide Prevention Lifeline phone number, which is 1-800-273-TALK (8255).

Part of the weekend effort is to also support the #BeThe1To campaign, which is designed to help people know steps to take if they are concerned about someone who might be considering taking their own life.

DiBenedetto said the paint scheme and the campaign are important to him too.

“Vegas has been an awesome track for us as far as performance, so I’m looking forward to that,” he said. “But bigger than that, I’m really honored to be driving the car to raise awareness for suicide prevention.”

“I have a conviction to always want to help others, and this is a topic close to my heart as we have had people close to us either take their own lives or contemplate it.”

“It’s an honor to be driving this race car this weekend, and I hope we can make a great impact on people to let them know that being vulnerable is OK.”

There will be no practice or qualifying prior to the start of Sunday’s South Point 400, and DiBenedetto will line up 14th, the line-up being set based on results at Bristol Motor Speedway.

The race is set to get the green flag just after 4 p.m. (7 p.m. Eastern Time), with live TV coverage on NBCSN.