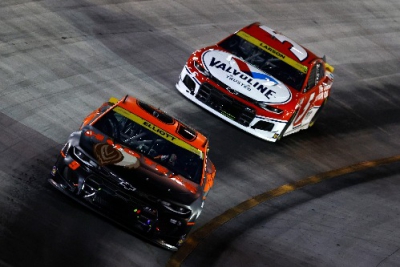 Sparks flew and tempers heated Saturday night as the Bass Pro Shops NRA 500 at Bristol Motor Speedway. Kurt Busch, Michael McDowell, Tyler Reddick, and Aric Almirola were the four drivers that were eliminated from the 2021 Playoffs.

While McDowell was a non-factor all night, Busch, Almirola, and Reddick looked to spoil the playoff grid by potentially knocking out Byron, Bowman, and Kurts younger brother Kyle Busch. But the better cars will prevail and especially at a track like Bristol Motor Speedway, the slower cars will be left in the dust.

We did have some heated drivers. Chase Elliott and Kevin Harvick both had some vulgar words to say to each other after an incident where Harvick got into Elliott, cutting his right front tire down. Elliott, not happy with Harvick, held him up and allowed Hendrick teammate Kyle Larson to pass Harvick and ultimately score his 6th win of the season. Both drivers pulled on pit road and had a conversion that involved finger pointing and pushing. But at the end the drivers both agreed to have a conversation in Elliotts hauler where the media wouldn’t be able to see.

Larson goes into the round of 12 as the playoff leader as they head to Las Vegas Motor Speedway next week on September 26th.