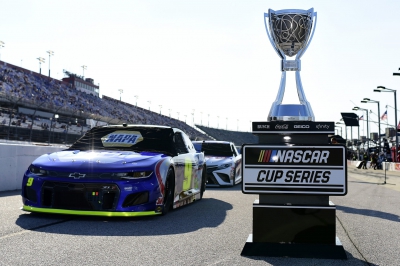 The continuing journey of the Cup Series season saw its regular-season conclude last Saturday night on the high banks of Daytona. There, Ryan Blaney captured the checkered flag for the second week in a row -- his third victory of the season -- giving him a wave of momentum heading into the Playoffs, as he now sits second on the grid with 24 Playoff points, holding the tiebreaker over Martin Truex Jr.

Kyle Larson put an exclamation point on a career-best regular-season, leaving Daytona with the regular-season championship and the 15 Playoff points that come with it. Couple that with his series-high five race wins and 12 stage wins, and Larson has a healthy lead on the competition with 52 Playoff points (+47 to the cutline).

His fiercest foe throughout the first 26 races was Joe Gibbs Racing's Denny Hamlin, though Hamlin didn't win a race during the regular-season. As a result, Hamlin fell from second in points to seventh with the reset, while his 15 Playoff points leave him only 10 points above the cutline.

Hamlin and those around him are on a fairly level playing field, though, as the 11 drivers ranked sixth through 16th are separated by just 13 points.

Here is how I see the postseason playing out:

Though mired in seventh on the grid, Hamlin has been the second-best car on track this season. 821 laps led, the best average running position (8th) in the field, and best average finish (9.2) will surely keep him alive during the Playoffs. Widely viewed as the best driver to never win a championship, it remains to be seen whether Hamlin can topple that barrier come the finale at Phoenix.

The Candy Man can, and Kyle Busch has indeed returned to form in 2021. After a disastrous year (for his standards, at least) that saw him earn his only victory in the third-to-last race of the season at Texas, Busch has returned to a steadier place in the series. He has two wins (Kansas and Pocono) to go along with 11 top-fives and 16 top-10's. He ranks fourth on the Playoff grid with 22 Playoff points, and is quite capable of making a deep Playoff run, as he looks to add to his two previous championships (2015 and 2019).

Dawsonville's native son will look to defend his championship from one year ago, as the 25-year-old embarks on yet another Playoff run -- his sixth in as many years. He enters the 2021 Playoffs in an eerily similar way to last season, once again fifth on the grid with two victories coming into the Playoffs. Last season he had 20 Playoff points, this season, 21. Given that, and the racetracks comprising the Playoffs not having changed from last season, I have a strong feeling that Elliott will have a big prize to race for in Phoenix.

Drivers who can make some noise:

The aforementioned Blaney is in the midst of the best season of his career: three wins, eight top-fives and 14 top-10's netted him 24 Playoff points and a second-place spot on the grid. By virtue of his win last Saturday in Daytona, Blaney begins the 10-race Playoffs on the pole at Darlington on Sunday night. He'll look to ride this current wave of momentum, as he didn't make it past the first round one year ago, and has yet to make the Championship Four in his four previous Playoff appearances.

The 23-year-old from Charlotte has had notable speed throughout the season -- running the fourth-most fastest laps -- and has amassed 16 top-10's, already a career-best. His lone win (Homestead-Miami) came in the third race of the season, however, and he's only had two top-10's in the past eight races; Byron will have to see a considerable uptick in performance if he hopes to advance far.

A Championship Four participant four times in the seven-year history of the Playoff format, Logano is always a threat come September. His championship run in 2018 began similar to where he is currently -- only one win heading into the Playoffs -- and he has the fifth-best average running position in the series, so don't count out the 13-year vet.

Though Truex has three victories on the season (Phoenix, Martinsville and Darlington), he hasn't won in over three months. On top of that, he has just two top-fives in the last 10 races. The one thing Truex can be confident about? His three victories came on Playoff tracks -- including the host of the finale -- but he has a lot to improve upon in order to make it that far.

Harvick has had a woeful season by the standards of his team, yet he still owns some formidable numbers that lead me to believe he can make a run during the Playoffs: an average finish of 11.5, the fourth-best in Cup; 5,987 laps run on the season, third-most in the series; 16 top-10's, tied for third-most in the series. He doesn't have a win, but it's not as if he's running that bad. Oh, and he's made the Championship Four five times in seven years ...

Bowman the Showman has earned three victories in 2021 -- the most in a season in his career. But outside of those wins? He has only three top-fives. To Bowman's credit, he entered last year's Playoffs with similarly mundane numbers and was able to advance to the Round of 8, so perhaps he can turn it on during the next 10 weeks.

Keselowski is in the midst of the worst year of his career: one win, seven top-fives and 10 top-10's. His only win came on a Superspeedway (Talladega), and he hasn't had much speed to note. He is also moving on from Team Penske and joining the No. 6 team at Roush Fenway Racing at season's end, so don't expect a fruitful Playoffs from Keselowski and crew.

The elder of the Busch brothers, Kurt has had a trying campaign. Though he won in dominating fashion at Atlanta in July, leading 144 laps, he's led a mere 31 laps in the other 25 races. Similar to Keselowski, Busch is moving over to the Michael Jordan-Denny Hamlin 23XI Racing in 2022, as Chip Ganassi Racing sold its assets to upstart Trackhouse Racing at the end of June. Busch certainly has a championship pedigree as the 2004 champion, but it'd be a surprise to see him advance more than one round.

Reddick is a Playoff competitor for the first time in his career, beating teammate Austin Dillon by 30 points to earn the final spot. The rightful owner of 13 top-10's, Reddick could advance past the first round, but I would bet against it simply due to inexperience.

Bell's sole victory in 2021 came in the second race of the season on the Daytona Road Course. With an average finish of 17th, Bell will likely be bounced early, though crew chief Adam Stevens is a two-time champion in his own right.

Daytona 500 Champion McDowell had the best start to a season a driver could ask for, but he just doesn't have the car to compete in the Playoffs. While in the midst of a banner year for both he and Front Row Motorsports, an average finish of 19.7 simply won't cut it.

The least-deserving of the Playoff field, Almirola has had a season to forget with one win (a shortened race at New Hampshire), two top-fives and three top-10's, while finishing the regular-season 23rd in traditional points. Situations such as Almirola's give reason to changing the criteria for qualifying for the Playoffs.