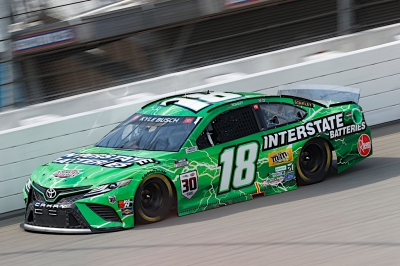 ● Busch started seventh but slipped to 10th by the time the competition yellow waved on lap 20.

● The driver of the No. 18 Interstate Batteries Toyota was told by crew chief Ben Beshore that he had a sizable hole in the right-front pontoon and they would need to spend time on pit road under caution to make the proper fix.

● Busch showed his strength as he quickly moved up through the field. He found himself in 19th by lap 30 and up to 11th by lap 40.

● The two-time Cup Series champion was able to move up to ninth by the end of Stage 1.

● The Interstate Batteries Camry came to pit road on lap 62, taking on four tires and a wedge adjustment. The No. 18 team’s quick service gained Busch three spots on pit road to restart sixth for Stage 2.

● The Interstate Batteries driver came to pit road to take on left-side tires on lap 113 and then cycled out to the lead to bring home the Stage 2 win.

● The Interstate Batteries Driver came to pit road following the stage on lap 122 to take on right-side tires and fill his No. 18 Camry up with fuel.

● As the Las Vegas native restarted 13th, the team hoped to make just one stop before having to pit for a final time. The strategy was to put one can of fuel in the car, with the hope that the race would stay green the rest of the way and car would spend less time on pit road than many of the teams in front of it.

● The Interstate Batteries driver came to pit road for the final time on lap 167, but he overshot his pit stall. The team elected to change four tires and Busch cycled back to 15th before the caution waved for rain on lap 179.

● Busch had a strong restart on lap 184, vaulting him from 14th to sixth in one lap.

● However, one more restart did not go his way, and Busch came home with a seventh-place finish.

“We had an eventful day with our Interstate Batteries Camry. We had a good car, and for some reason the set of tires we put on it were not good. Ben (Beshore, crew chief) decided to put four tires on the next stop, and then I also slid through the stall. We battled hard and got back up there, but we needed the track position to have a shot to win.”