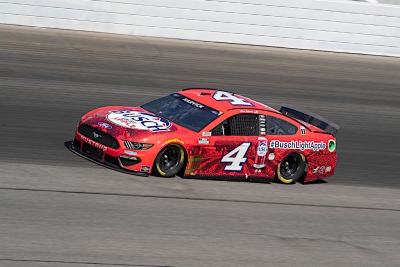 ●  The No. 4 Busch Light Apple Ford Mustang was a handful in the opening laps. “No rear grip on exit,” said Harvick after the competition caution on lap 20.

●  The team pitted for four tires and fuel with a right-rear wedge adjustment during the caution period on lap 22.

●  Harvick held steady in 14th through the end of the stage.

●  Pitted for four tires and fuel with a right-front tire pressure adjustment at the conclusion of the stage.

●  Harvick maintained 11th place through lap 80 before losing some ground and falling back to 14th on lap 83.

●  “On my balance we really didn’t help the front… and we hurt the back,” said Harvick about his racecar on lap 87 while running 15th.

●  Made scheduled, green flag pit stop for four tires and fuel on lap 101.

●  Returned to the track in 20th and held the spot through the end of the stage.

●  “I’m sure we’re way more trimmed out than we probably should be,” said Harvick about his car’s handling condition.

●  Pitted for four tires and fuel with an assortment of chassis adjustments at the conclusion of the stage.

●  Crew chief Rodney Childers keyed his mic on lap 145 to tell Harvick, “Lap times are good enough to run top-five… we just gotta figure out a way to get you there.”

●  Made scheduled, green flag pit stop for four tires and fuel with a right-rear wedge adjustment on lap 164.

●  By lap 171, Harvick was back to 14th with a handful of cars still in front of him needing to pit.

●  Two laps later, Harvick was 11th and looking to crack the top-10, which he did on lap 175 when he picked off two cars to claim ninth.

●  Just before a caution on lap 180 for rain, Harvick ran the fastest lap of the race.

●  Harvick stayed out during the caution to maintain his ninth-place position when the race restarted on lap 187.

●  Harvick deftly avoided a multicar accident in turn three on the restart and held onto his ninth-place standing.

●  The final eight laps proved dicey after the lap-193 restart with plenty of jockeying among the top-10. Harvick scraped the wall at one point, which lost him some track position and put him outside the top-10 when the checkered flag dropped.

●  With an insurmountable 104-point margin over 17th-place Austin Dillon in the championship standings, Harvick clinched his spot in the 16-driver NASCAR Playoffs with one race still remaining in the regular season. He joins Stewart-Haas Racing teammate Aric Almirola who earned his playoff spot by virtue of his win July 18 at New Hampshire Motor Speedway in Loudon.

●  Harvick hasn’t finished outside the top-15 at Michigan since June 2015.

●  Ryan Blaney won the FireKeepers Casino 400 to score his sixth career NASCAR Cup Series victory, his second of the season and his first at Michigan. His margin over second-place William Byron was .077 of a second – the closest Cup Series finish in track history since the advent of electronic scoring in 1993.

●  This was Ford’s 710th all-time NASCAR Cup Series victory and its seventh straight at Michigan.

●  This was Ford’s series-leading 42nd win at Michigan, which is the most at any track currently on the NASCAR Cup Series schedule. Ford scored its first Michigan win with NASCAR Hall of Famer David Pearson on Aug. 17, 1969.

●  There were six caution periods for a total of 29 laps.

●  Twenty-six of the 37 drivers in the FireKeepers Casino 400 finished on the lead lap.

●  Kyle Larson remains the championship leader after Michigan with a 28-point advantage over second-place Denny Hamlin.