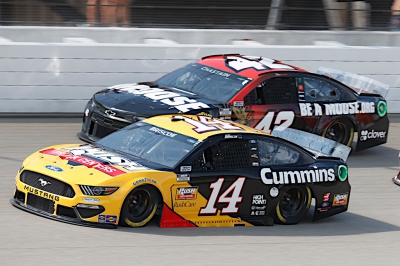 ● The Rush Truck Centers/Cummins driver was 17th after the initial start, but on lap five he reported that his Ford Mustang was loose on entry and exit.

● When the first caution flag waved on lap 20, Briscoe pitted from the 26th position for tires, fuel and several adjustments to tighten up the No. 14 Mustang. He restarted 20th on lap 26, but the changes were not enough, and he was back in the 26th spot when the yellow flag was shown again on lap 32.

● After the race returned to green, Briscoe slipped back to 31st before working his way forward as the Rush Truck Centers/Cummins Ford began to tighten up later in the run. He completed the stage in the 27th position and pitted for tires, fuel and additional adjustments at the stage break.

● The second stage returned to green on lap 67 with Briscoe lined up 23rd. On lap 85, he radioed that the No. 14 was the best it had been all day, despite running in the 25th position.

● By lap 100, the Rush Truck Centers/Cummins driver was in 22nd and said his Ford Mustang was becoming too tight. The leaders began making their scheduled green-flag pit stops while Briscoe stayed on track.

● Briscoe made his stop on lap 106, with the team giving him four tires, fuel and minimal adjustments. He cycled through to 20th and gained two more spots by the conclusion of the second stage to cross the line 18th.

● He pitted during the stage break on lap 124 for tires and fuel and told the team the car was improving with each run.

● Briscoe battled a loose car at the beginning of the run, but he told the team he felt like it would improve as they completed the longer green-flag segment.

● He was running 18th when the leaders began to make green-flag pit stops on lap 155, and he stayed on track to gain position though his car had become too tight.

● Briscoe made his final stop on lap 166 under green-flag conditions, giving up the ninth spot. The Rush Truck Centers/Cummins Ford got tires, fuel and final adjustments. Briscoe returned to the track in 26th and had progressed to 20th before the caution flag waved on lap 181.

● Most of the leaders remained on track during the caution, and Briscoe lined up 13th for the lap-187 restart. He was scored 10th on lap 187 as the yellow flag was shown for a multicar wreck on lap 188.

● The Cup Series rookie restarted seventh with eight laps remaining and was running fourth on lap 197 when the No. 1 car of Kurt Busch got loose and slid up in front of him, causing slight damage to the nose of the Rush Truck Centers/Cummins Ford. Briscoe held on to finish 11th in his first Cup Series start at Michigan.

● Briscoe earned his seventh top-15 of the season, and it came in his 25th career NASCAR Cup Series start and his first at Michigan.

● Briscoe was the highest finishing NASCAR Cup Series rookie for the 21st time this season.

● Ryan Blaney won the FireKeepers Casino 400 to score his sixth career NASCAR Cup Series victory, his second of the season and his first at Michigan. His margin over second-place William Byron was .077 of a second – the closest Cup Series finish in track history since the advent of electronic scoring in 1993.

● This was Ford’s 710th all-time NASCAR Cup Series victory and its seventh straight at Michigan.

● This was Ford’s series-leading 42nd win at Michigan, which is the most at any track currently on the NASCAR Cup Series schedule. Ford scored its first Michigan win with NASCAR Hall of Famer David Pearson on Aug. 17, 1969.

● There were six caution periods for a total of 29 laps.

● Kyle Larson remains the championship leader after Michigan with a 28-point advantage over second-place Denny Hamlin.

“We definitely didn’t start off how we wanted to. The guys kept working on it and making it better, and I felt like at the end we got two really good restarts. I thought I was going to be looking really good for a top-five finish, but Kurt (Busch) got loose and I had nowhere to go. It caved the nose in, and obviously we were struggling those last few laps. From where we started to where we finished it was great. I just thought for a second we would finish way better than 11th. We’ve made big gains the last month and a half. It’s really encouraging, and we have one more week to try to make it in the playoffs at Daytona, where anything can happen. So we’ll go there and try to get in.”

The next event on the NASCAR Cup Series schedule is the Coke Zero Sugar 400 on Saturday, Aug. 28, at Daytona (Fla.) International Speedway. The regular-season finale starts at 7 p.m. EDT with live coverage on NBC and SiriusXM NASCAR Radio.