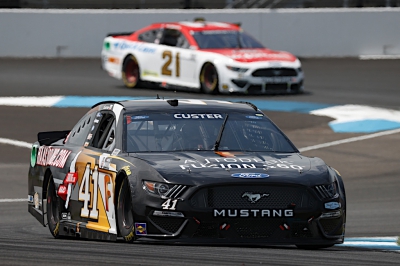 ● The Autodesk Fusion 360/HaasTooling.com driver maintained his starting spot in the opening laps of the Verizon 200 at the Brickyard.

●  On lap 10, Custer passed Michael McDowell for ninth after reporting that he felt like his drive off the corners was better than the cars around him.

●  Crew chief Mike Shiplett made a strategy call on lap 13 and called his driver down pit road for four tires and fuel before the end of the stage.

●  The No. 41 Autodesk Fusion 360/HaasTooling.com team stayed out during the stage break to restart Stage 2 in 10th.

● In the opening lap on Stage 2, Custer passed three cars to put his Ford Mustang in the seventh position, right behind his teammate Chase Briscoe.

●  On lap 21, the Autodesk Fusion 360/HaasTooling.com driver passed three cars in one turn, putting him into the top-five for the first time in the race.

●  The Ladera Ranch, California, native reported on lap 25 that he needed more brake on the next pit stop. He gained another position to put his Ford Mustang in fourth.

●  With just two laps to go in the stage, the No. 41 team came down pit road for four tires and fuel to put him in a good position when the field went green for the final stage.

●  Custer finished the stage 14th. The team stayed out on the track once again during the stage break to restart the final segment in fifth.

● The Autodesk Fusion 360/HaasTooling.com driver reported during the lap-40 caution that his car was good, but if anything he was a little tight in the corners.

●  After an intense battle with the No. 11 on the lap-43 restart, Custer settled into eighth place.

●  The No. 41 Autodesk Fusion 360/HaasTooling.com team came down pit road on lap 54 for four tires, fuel and an air pressure adjustment. Custer was 20th when he came back on the track.

●  When the field cycled through pit stops, Custer was running eighth until the caution came out on lap 72.

●  Custer avoided an accident that brought out the red flag with only four to go. But when racing resumed, he was caught up in another incident during overtime. The No. 41 Autodesk Fusion 360/HaasTooling.com Ford received heavy damage to the rear. The team pitted to attempt to repair the damage.

●  Due to the damage sustained, Custer had to settle for 25th.

● Twenty-four of the 40 drivers in the Verizon 200 at the Brickyard finished on the lead lap.

● Kyle Larson remains the championship leader after Indianapolis with a 22-point advantage over second-place Denny Hamlin.

“We had a really good day in terms of execution and sticking to our plan. Unfortunately, that changed toward the end and we were involved in a wreck during overtime. Our Autodesk Fusion 360/HaasTooling.com Ford Mustang was a top-five car but luck wasn’t on our side, so we'll head to Michigan and give it another shot."