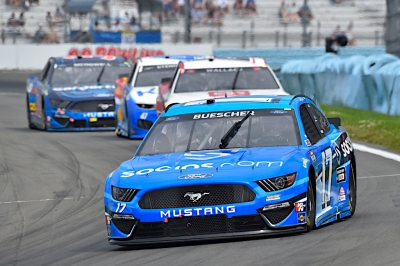 Buescher began the day from the 24th position in the first NASCAR event back from the two-week Olympic break. He maintained his track position early, and took an opportunity at the lap 10 competition caution to stay out and pick up a handful of spots. He continued to move forward through the field on the ensuing restart, working his way up to 14th at the conclusion of the first stage.

The Socios team made quick work of the pit stop during the stage break, but with alternate strategies playing out Buescher restarted 24th for the second segment. With passing tough to come by for the entire field, Buescher battled hard to pick up three spots and finish 21st in the second stage.

Buescher began the third and final segment of the day from the 16th position, but as the field stretched out lapped traffic became a major obstacle for the Socios Mustang. The team hit pit road for the final time and cycled out 20th with just under 20 laps to go. From there, Buescher’s car came to life and he began picking off positions as the laps dwindled. He would work his way up to 17th to finish the day.

NASCAR returns to action next weekend at the famous Indianapolis Motor Speedway, with the Cup cars set to tackle the road course for the first time. The race is set for 1 p.m. ET on NBCSN, and can also be heard on MRN and SIriusXM Channel 90.