Kyle Busch, No. 18 SNICKERS Toyota Camry Race Recap for the Go Bowling at the Glen 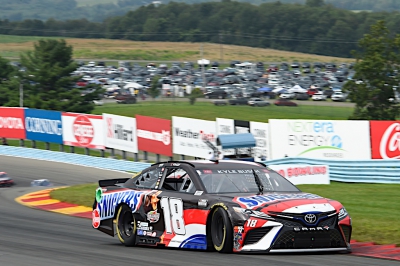 ● The No. 18 SNICKERS Toyota had raced from 20th to 11th place by the time the competition caution was displayed on lap 10. Busch reported that the car was handling extremely loose at most points on the track.

● Green-flag racing resumed, and Busch quickly made a move to grab the eighth position.

● As Stage 1 drew to a close, a number of teams elected to make trips to pit road for service as part of their overall race strategy. The SNICKERS team remained on the track, finishing the stage in sixth place.

● During the caution the team made a big chassis adjustment, changed four tires and added fuel. Because a number of teams stopped prior to the end of the first stage, Busch lined up 20th to start Stage 2.

● The Las Vegas native was in 18th place when NASCAR displayed a full-field caution for a single-car incident. Busch reported during the break that the balance on the car was better but still lacked what he needed to be aggressive.

● Green-flag racing resumed, and Busch quietly went to work. He was back in the top-10 on lap 36, and he reported that the SNICKERS Toyota lacked rear grip.

● The stage ended with Busch in 10th place. The team elected to stay out as part of their overall race strategy. This placed Busch in ninth place to start the final stage.

● When racing resumed, the two-time NASCAR Cup champion quickly advanced, picking up two positions on the restart to move to seventh place.

● The final round of green-flag pit stops started taking place on lap 55 with Busch scored in third place.

● The No. 18 SNICKERS Toyota Camry team made their final trip to pit road on lap 57 for a round of air pressure adjustments, four tires and fuel. Once pit stops cycled through, Busch was scored in third place.

● Busch was passed for third with less than 10 laps to go in the race. He maintained fourth place to the end to pick up the top-five finish.

Kyle Busch, driver of the No. 18 SNICKERS Toyota Camry for Joe Gibbs Racing:

“We didn’t quite have the car we needed with our SNICKERS Camry today. It was just all on top of the racetrack. We haven’t been here in a few years, and the track fell off, the grip fell off, and the tire being too hard – we just kind of missed all of that for the package that we needed. You know I’m pretty good here, and the cars are good here. We kind of overcame the downfall of what we had for car setup, but can’t blame anybody. Got to go to work, figure it out and make it better for what’s going to be here next year.”