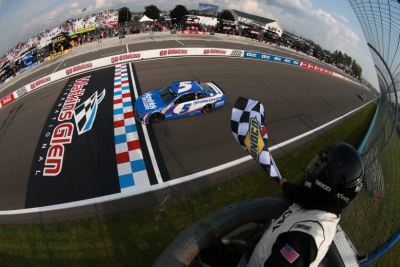 It’s been 21 days since the last time the drivers of the NASCAR Cup Series have raced against one another. Today, the seven-turn road course in Watkins Glen, New York welcomed them back and Kyle Larson was able to ‘strike’ victory in the Go Bowling at the Glen event.

Larson came into the race 13 points behind Denny Hamlin in regular season points and he left tied for the points lead after an impressive race.

“Chase [Elliott] was already catching me pretty quick even with me being in the open track. So when I caught those four lapped cars, I got into the 38 here, I thought the No. 9 would be right on me. Luckily I had a comfortable enough gap to make a mistake like that,” Larson said post-race to NBC Sports.

“It’s awesome. This really just shows how good their organization is. All the people that they have assembled at their race shop. The four of us could not have gotten all these wins without them,” Larson continued about the success of Hendrick Motorsports this season.

Both Christopher Bell and Chase Elliott were forced to start in the rear for today’s race at Watkins Glen for issues with their rear window air deflectors. Along with starting in the rear, their crew chiefs were ejected for the race and fined $25,000 each. Additionally, they were each docked 10 driver points.

Due to NASCAR’s formula to determine the starting grid, Team Penske secured the top-three spots with Brad Keselowski on the pole beside Joey Logano in second.

By the end of lap one, Keselowski was able to put a half-second gap on teammate Logano.

Coming to the lap ten competition caution, Keselowski spun his car around in turn six after battling brake problems early. He was able to collect his car and only lost five spots. Keselowski led a small group of cars to pit road under this yellow including Elliott and Bell who made their way up to 19th and 22nd respectfully.

Logano stayed on track during this caution and led the field into turn one on the restart. With three to go in the stage, crew chiefs decided to play strategy, bringing many of the leaders down pit road including Martin Truex Jr, Ryan Blaney, and Kevin Harvick. While this happened Logano was able to hold off a charging Kyle Larson to capture the stage one victory.

Ricky Stenhouse Jr. obtained the lead under the pit sequence and was quickly disposed of by Truex Jr. and Chase Briscoe by turn one. Just two laps after the field took the green, the caution flew for James Davison who was stalled on track.

After scoring stage points in stage one, Elliott had to pit under green to replace his tires after he flat-spotted them in turn one.

Hamlin was the first of the leaders to pit and he brought Ricky Stenhouse Jr., Tyler Reddick, Alex Bowman and many others with him.

Truex Jr. kept the lead through this stage break and when the field was shown the green flag to begin the final stage, a three-car battle for the lead began between Truex Jr., Bell, and Larson. On lap 54, Larson gets into Bell putting an end to the battle for the lead and allowing Truex to once again pull away.

On the next lap, the brake troubles continued for Keselowski as he spun again in turn one, this time taking his teammate, Logano, with him. The green continued to be shown as the field was making its way down pit road for green flag pit stops.

When the two leaders, Truex Jr. and Larson, made the trip to pit road for fuel and tires, Larson’s crew helped him jump the No. 19 machine and take the position by the exit of pit lane; Larson would ultimately become the leader once the green flag stops came to an end.

With 20 laps to go, the No. 9 of Chase Elliott came to life as he made his way past third place, Kyle Busch, and set his sights on second place, Martin Truex Jr.

Elliott was able to make the pass on Truex Jr. with nine laps to go, still 5.5 seconds back from Larson.

Larson majestically made his way through lapped traffic and was able to capture the Go Bowling at the Glen victory for his fifth win of the season and his second on a road course this year.

Next week, the NASCAR Cup Series heads to a familiar racetrack with a different layout. Indianapolis Motor Speedway will be home to the Cup Series’ inaugural trip to the road course configuration. Catch the Verizon 200 at the Brickyard on Sunday, August 15th at 1:00PM EST on NBC.