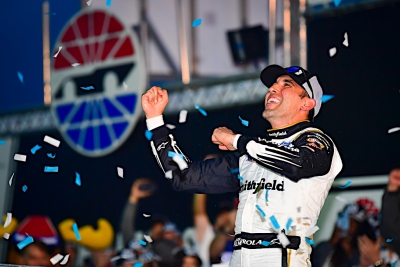 “Congratulations to Aric, Mike, Tony, Gene, and the entire No. 10 crew,” said Doug Yates, President and CEO of Roush Yates Engines. “Ford Performance Teams ran strong at New Hampshire Motor Speedway, and it was great to see 5 Mustangs finish in the top 6. Despite a delayed start and rain, Aric and Mike were able to make their way to the front of the field and take home a well-deserved checkered flag at the Magic Mile.”

Almirola started the race in 22nd position but was able to maneuver the No. 10 Stewart-Haas Ford Mustang through the field, avoiding a multi-car accident at the beginning of the race. An early rain delay brought darkness into play at the end of the race and the decision was made to end 8 laps early as a precaution. With only 15 of 37 drivers on the lead lap, Almirola was able to pass lapped traffic and finish just over half a second in front of second place.

“I’m so proud of everybody at Stewart-Haas Racing, Roush Yates Engine Shop. We have been fighting, scratching, clawing and, man, this feels so good to have something pay off for all the hard work, so just really happy” commented Almriola.

The NASCAR Cup & Xfinity Series take a two-week break for the Summer Olympics in Tokyo and return on August 7th & 8th at Watkins Glen International.