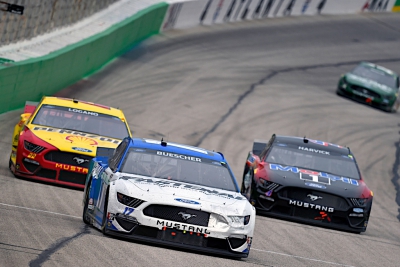 Challenging conditions at Atlanta, including threats of rain and a lengthy red flag for track repairs, created a chaotic 400 miles for the field on Sunday afternoon. Chris Buescher battled through the challenges and damage from an early incident to finish 16th in his Fastenal Ford Mustang.

Buescher started the day from the 18th position and quickly worked his way up through the field, reaching 14th by the competition caution at lap 25. He would continue to march forward in the first stage, reaching the 12th spot in a three-wide battle before finishing the first stage of the day in 15th.

The second segment of the afternoon ran caution-free, with green flag pit stops the large driver of position changes in the field as track temperatures cooled with rain threatening. Crew chief Luke Lambert brought Buescher down pit road just before the race reached the halfway point and was deemed official. As skies cleared and it became clear the race would run its scheduled duration, Buescher finished the second stage in 17th.

Though the weather had subsided, track officials were forced to red flag the field to repair damage to the front stretch. That would be the last break in the action of the day, as the race ran green to the end and Buescher would continue to battle for a 16th-place finish.

Buescher and the No. 17 team are back in action next weekend at New Hampshire Motor Speedway. Sunday’s race is set for 3 p.m. ET on NBCSN, and can also be heard on PRN and SiriusXM Channel 90.