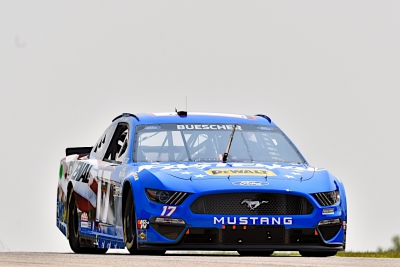 Chris Buescher ran in the top ten for much of the late stages of Sunday’s NASCAR Cup Series race at Road America, but pit strategy and damage from an earlier incident conspired to keep him from finishing up front. Buescher restarted 18th with 17 laps left in the race after an ill-timed caution, and maintained that spot to the end of the event.

With the event marking the first time the Cup Series has run at Road America since 1956, teams were able to practice Saturday afternoon before a group qualifying session raceday morning. Buescher found speed in his Fastenal Ford Mustang, and advanced to the final round of the qualifying session. He would finish 12th on the speed charts, where he began the race.

A chaotic start to the race was a sign of the frenetic racing to come, and the first caution of the day came out on just the second lap of the race. Buescher maintained his track position to the second yellow flag on lap 12, reporting damage to his fenders from contact during the previous restart. The caution would serve as the end of stage one, with Buescher scored 14th.

After pitting for four tires and fuel during the break, Buescher began the second stage from the 24th position as teams began to try divergent pit strategies. The Fastenal team would join in on the games, bringing the Ford Mustang down pit road with just three laps to go in the stage in an effort to gain track position.

The tactic worked, as Buescher began the third and final stage of the event from the eighth position. The team looked primed to capitalize on the advantage, but a caution fell on lap 42 just before their final scheduled stop. With competitors short-pitting the caution, the No. 17 was relegated to the 18th position for the final restart of the day. Battling the earlier damage, Buescher was able to fend off the field and maintain his position to the checkered flag.