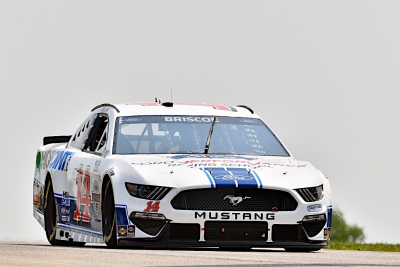 ● The Ford Performance Racing School/HighPoint.com driver radioed during the first caution on lap four that his Mustang was tight across center. He stayed on track and lined up 28th for the restart on lap five.

● Briscoe worked his way up to 23rd while still taking care of his equipment and made his way to pit road for a scheduled green-flag stop on lap 12 just before the yellow caution flag was shown. The No. 14 crew gave him four tires, fuel and an air pressure adjustment, but a penalty while exiting his pit box sent Briscoe to the back of the field.

● The team took advantage of the opportunity to top off on fuel at the end of the stage and asked Briscoe to save his tires for the start of the second stage.

● The No. 14 Ford Mustang gradually made its way through the field with Briscoe reaching 21st before making a scheduled green-flag pit stop prior to the end of the stage. On lap 27, the Ford Performance Racing School driver asked for more forward drive and was given fresh tires, fuel and a chassis adjustment.

● He returned to the track in 22nd and secured a 20th-place finish in Stage 2.

● The Ford Performance Racing School/HighPoint.com driver restarted fifth and was running seventh on lap 44 when the yellow flag waved. Briscoe visited the No. 14 team on pit road for tires, fuel and an air pressure adjustment to help with front turn and lined up ninth for the lap-46 restart.

● Briscoe slipped back outside the top-10 following the restart but quickly began to march toward the top-five.

● With three laps remaining, the Cup Series rookie’s motor shut off while he set up a pass on Denny Hamlin, but he was able to continue and hung on for the sixth-place finish, tying his career-best finish.

● Briscoe earned his second top-10 of the season and equaled his best NASCAR Cup Series finish. The first time he finished sixth was on May 23 at Circuit of the Americas (COTA) in Austin, Texas.

● Briscoe was the highest finishing NASCAR Cup Series rookie for the 16th time this season.

● Chase Elliott won the inaugural Jockey Made in America 250 to score his 13th career NASCAR Cup Series victory and his second of the season. His margin over second-place Christopher Bell was 5.705 seconds.

● There were four caution periods for a total of nine laps.

● Thirty-four of the 40 drivers in the Jockey Made in America 250 finished on the lead lap.

“I thought we were good enough to run fourth there at the end, but my engine shut off. I was tucked right up to the 11 car and about to make a move on him, and the engine just shut off. I don’t know if it got really hot when I was super close to him and spiked the temps or what. I feel like if it wasn’t for that, we probably would have run fourth. Then I lost a ton of track position and had to deal with the 42. Overall, it was a fun day. This place is a lot of fun when you are slipping and sliding around like that. I wish we could have been top-five, but to leave here with sixth is a good day and it was really cool to be the best Ford today. We definitely faced a lot of adversity with not getting a qualifying lap in, and then the penalty at the beginning. I felt like we had a really good car on the long run. I am proud of that. It was a good day overall and we needed that. We will go on to the next one and see if we can get better.”

The next event on the NASCAR Cup Series schedule is the Atlanta 400 on July 11 at Atlanta Motor Speedway. The race starts at 3:30 p.m. EDT with live coverage on NBCSN and SiriusXM NASCAR Radio.