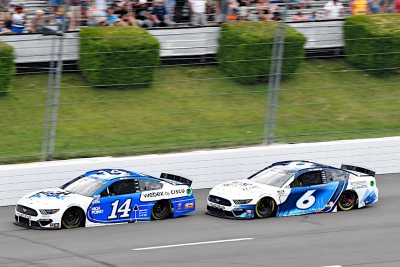 ● The first caution of the race occurred on lap 10 with Briscoe riding in the 25th position. He radioed to the HighPoint.com/Webex by Cisco team that he was barely slipping the back end of the car on entry into turn one. The team pitted for four tires, fuel and an air pressure adjustment, and Briscoe restarted 29th on lap 12.

● Briscoe ran as high as 21st but ultimately finished the first stage 24th, reporting that his Ford Mustang was tight off the corner. The team elected to stay out at the stage break to gain track position when the leaders pitted.

● After 16 green-flag laps, Briscoe said his Ford machine started the run loose but had tightened up and was good on entry.

● When the caution flag waved on lap 54, he asked for a slight adjustment to help the front end turn. He noted his HighPoint.com/Webex by Cisco Mustang was really good and he didn’t want to change the handling too much. The team gave him four tires, fuel and a small chassis adjustment on lap 55, and he restarted in the 24th position on lap 58.

● Briscoe raced his way up to the 14th spot before the lap-73 caution. He told the No. 14 team his balance was great as he pitted for fresh tires and fuel, restarting 15th on lap 76.

● At the conclusion of the second stage, Briscoe crossed the line 15th and remained on track to line up 16th for the beginning of the final stage.

● On lap 93, the HighPoint.com/Webex by Cisco driver gave up the 11th position to make a scheduled green-flag pit stop for right-side tires, fuel and a slight air pressure adjustment to give his Mustang more rear grip. He returned to the track in the 29th position as stops continued to cycle.

● Once stops cycled through Briscoe was running 11th on lap 111, but he began to fall back, reporting his HighPoint.com/Webex by Cisco Ford had become way too tight. He was able to change his line to help with handling as the laps began to wind down, but it was too late to make up ground and the No. 14 crossed the line in 24th place.

● Alex Bowman won the Pocono Organics CBD 325 to score his fifth career NASCAR Cup Series victory, his third of the season and his first at Pocono. His margin over second-place Kyle Busch was .683 of a second.

● There were eight caution periods for a total of 25 laps.

● Thirty-one of the 38 drivers in the Pocono Organics CBD 325 finished on the lead lap.

● Denny Hamlin remains the championship leader after Pocono with an eight-point advantage over second-place Kyle Larson.

Chase Briscoe, driver of the No. 14 HighPoint.com/Webex by Cisco Ford Mustang for Stewart-Haas Racing:

“Our car was so good earlier in the race and I really felt like we had something to work with, but we fired off too tight on old tires, and in the end that hurt us. We’ve definitely got something we can build on for tomorrow, and we’ll give it another shot at putting the HighPoint.com/Webex by Cisco Mustang in the top-10.”

The second event of the weekend’s NASCAR Cup Series doubleheader at Pocono is the Pocono Mountains 350 on Sunday. The race starts at 3:30 p.m. EDT with live coverage provided by NBCSN and SiriusXM NASCAR Radio.

Rate this item
(0 votes)
Tweet
« Buescher Battles to 20th-place Finish in First Half of Pocono Doubleheader; Set to Start on Pole on Sunday Kyle Busch, No. 18 M&M'S Minis Toyota Camry Race Recap for the Pocono 325 »