Buescher Battles to 20th-place Finish in First Half of Pocono Doubleheader; Set to Start on Pole on Sunday 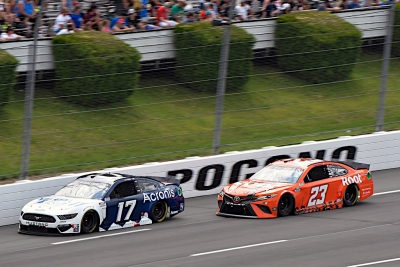 Roush Fenway Racing’s Chris Buescher battled to the waning moments of the final lap to finish 20th in the first half of NASCAR’s Cup doubleheader on Saturday at the Tricky Triangle of Pocono Raceway. Buescher picked up the 20th spot in the closing laps of the 325-mile race, setting up the No. 17 Acronis/Visual Edge IT Ford to start on the pole of tomorrow’s second half after a 20-car inversion.

“That was a tough day for sure,” said Buescher after the race. “We had some speed early but got some damage there during the first stage and had a hard time getting the car right from that point.

“Track position is very important here at Pocono,” added Buescher. “So we knew how important picking that 20th spot up was and I was very pleased we were able to get the position. We’ll come out here tomorrow, start on the front row and see if we can’t make some noise with this Acronis Ford.”

Buescher, a former winner at Pocono, started the race 25th - after falling out of last week’s race in an early accident - but drove his Acronis Ford through the field early, finishing 16th in stage one. However, Buescher’s Ford sustained damage during the first stage – forcing the team to battle feverishly with the car’s handling throughout the event.