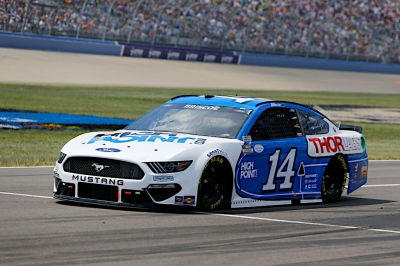 ● Briscoe entered the top-10 on lap six but slipped back to 12th on lap nine. The HighPoint.com/Thorlabs driver held that position until lap 34 when cars further back in the field began to move forward.

● On lap 39, Briscoe reported he was free on entry to the corner. Crew chief Johnny Klausmeier called him to pit road five laps later for a scheduled green-flag stop. He received four tires, fuel and adjustments and returned to the track in 23rd, one lap down, just as the yellow caution flag was shown for the first time.

● The HighPoint.com/Thorlabs Mustang was running 20th when the field was slowed for an incident in turn two. Briscoe relayed his handling was good but he needed his right-rear tire to have more grip on entry. He pitted under the caution for four tires, fuel and additional adjustments, and restarted 20th on lap 86.

● Briscoe battled for position over the remaining five laps in the stage to finish 19th.

● The sixth caution of the race was called on lap 133 with Briscoe running 15th. He told the team his rear grip was much better but he still needed help with turn, as the HighPoint.com/Thorlabs Ford was tight center-off. The No. 14 team pitted for tires, fuel and several adjustments to help with front turn.

● Briscoe restarted 12th and worked to find the best line until caution came out on lap 174. Under yellow, he pitted for right-side tires and fuel, and then lined up first for the lap-181 restart.

● The HighPoint.com/Thorlabs driver held off Kyle Larson for a lap and a half before moving back to second. On the final lap of the stage, he battled with the No. 3 car to the finish line and was scored third at the line.

● After pitting for four tires, fuel and adjustments to help front turn, Briscoe started the final stage in the 13th position on lap 191.

● He fought his way up to eighth before the yellow flag was shown on lap 197. He radioed to the team that the HighPoint.com/Thorlabs Ford fired off the best it had all day. The team elected to stay on track and restarted seventh on lap 203.

● Briscoe maintained his position inside the top-10 and was running eighth until the next caution on lap 219. He asked the team for just a slight air pressure adjustment to help his front turn but noted the previous adjustments did help his handling. He was seventh off pit road and lined up eighth for the lap-223 restart.

● The HighPoint.com/Thorlabs Ford Mustang was running seventh on lap 228 when Briscoe drifted up the track and made contact with the outside wall in turn four. He reported that he had no brakes. After pitting for the team to assess damage, it was determined the No. 14 could not continue due to a loss of brakes.

● Briscoe led once for five laps.

● Kyle Larson won the inaugural Ally 400 to score his 10th career NASCAR Cup Series victory, his fourth of the season and his third straight. His margin over second-place Ross Chastain was 4.335 seconds.

● Denny Hamlin remains the championship leader after Nashville with a nine-point advantage over second-place Larson.

Chase Briscoe, driver of the No. 14 HighPoint.com/Thorlabs Ford Mustang for Stewart-Haas Racing:

“We just lost the brakes getting into turn three. It’s super unfortunate for our HighPoint.com/Thorlabs team. We had a really, really good car, and I feel like we were going to be right there for a top-five at the end. We just needed a long run, but even on the short run we made our car so much better, so I really hate it, because that was going to be our best run of the year for sure and something like that happens. It’s really wild to see all the brake issues we’ve had today. We were able to do the Goodyear test a few months ago and knew that brakes were going to be way worse than everybody else thought. So we beefed them up and it still wasn’t good enough, so it’s unfortunate. We’ll go on to Pocono and try to have a good run for HighPoint.com at their home track.”

The next event on the NASCAR Cup Series schedule is a doubleheader June 26-27 at Pocono (Pa.) Raceway. The first race starts at 3 p.m. EDT on Saturday, and the second race begins at 3:30 p.m. on Sunday. Both races will be broadcast live on NBCSN and SiriusXM NASCAR Radio.