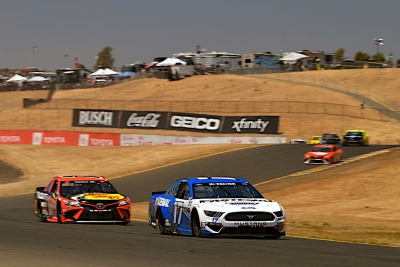 In a chaotic final set of laps at Sonoma Raceway Sunday afternoon, Chris Buescher maintained composure and finished 16th in the Fastenal Ford Mustang, despite being caught in the middle of a scuffle in the final turn in NASCAR overtime.

The scheduled 90-lap race went into overtime after a yellow at lap 87. Overall, the race saw five natural cautions, one of which came late in the race and played a major factor in the No. 17 team’s pit cycle.

Buescher started the day from the 12th spot after a top-10 last week, and used some varying pit strategy throughout the day to put himself in position late. With a competition caution at lap 10, crew chief Luke Lambert brought the Fastenal Ford to pit road at lap eight, just prior to the scheduled yellow, putting Buescher ahead of the cycle.

He restarted 10th on the ensuing green and would pit under green just a few laps later to sacrifice the track position and end the opening stage in 34th. But, with the pit stop just prior to the stage flag, Buescher was again on the positive side of the track position when the field took the stage two green flag at lap 23, where he started 11th.

He worked his way inside the top-10 by lap 31 when another yellow was displayed, and hit pit road under that break to restart 19th. But, with just five to go in the second 20-lap stage, Buescher powered past five machines to end the segment in 14th.

He fired off 10th for stage three, and hit pit road under green at lap 55 while running 14th. He was getting set to pit again under green just past lap 70 when the yellow came out, putting him below the 20th spot on the ensuing restart with just 16 to go.

Despite the flip in the pit cycle, Buescher worked his way back to 18th for another restart with 11 to go, and would fight through the multiple incidents in the closing laps to bring home the 16th-place result.

The NASCAR Cup Series returns to action next weekend at Texas Motor Speedway for the All-Star Race on Sunday, June 13. Buescher is set to compete in the NASCAR All-Star Open for a chance at racing into the All-Star Race. It is scheduled for 6 p.m. ET on FS1, and coverage can also be heard on MRN and SiriusXM Channel 90.