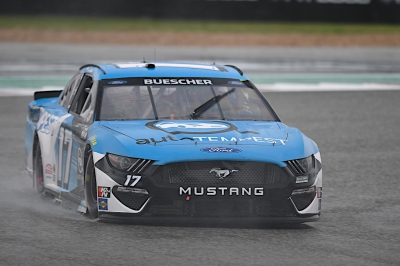 In one of the wildest races the NASCAR Cup Series has seen this season, Chris Buescher survived an adventurous afternoon to finish 13th in the AutoTempest Ford.

Rain was the theme of the weekend, one that saw a practice session Saturday morning, and qualifying Sunday morning just prior to the race. The weather held off most of the morning before it ultimately set in just after the green flag. It ultimately was the cause of the final red flag, which saw the race end at lap 54, 14 laps shy of the scheduled distance.

Buescher’s day started with a mechanical issue during qualifying, which put the team to the rear of the field to start the afternoon. However, he overcame the deficit to finish sixth in the opening stage, before going on to secure the top-15 result.

The start of the race saw interesting strategies play out as teams rolled off pit road on rain tires. Buescher brought his Ford Mustang to pit road in pace laps to switch to regular (slick tires), before pitting again just after lap one to switch back to rain tires.

After the first yellow at lap seven, Buescher restarted 14th and just a couple laps later worked his way inside the top-10. He would advance up to sixth by lap 15 securing valuable stage points.

He stayed out under the stage break and would restart fifth, and ran seventh by the next yellow at lap 19. He pitted during that yellow and restarted near the tail end before a multi-car incident at lap 24 sent the race to red. He went on to finish the stage in 14th and restarted stage three in 10th.

The final yellow waved at lap 53, one that ultimately sent the race to red due to track conditions, and would end the race with Buescher in 13th.

Buescher and the No. 17 team return to action next weekend at Charlotte Motor Speedway for the Coca-Cola 600. Race coverage is set for 6 p.m. ET Sunday on FOX and PRN, and coverage can also be heard on SiriusXM Channel 90.