Sixth-Place Run for Briscoe at COTA 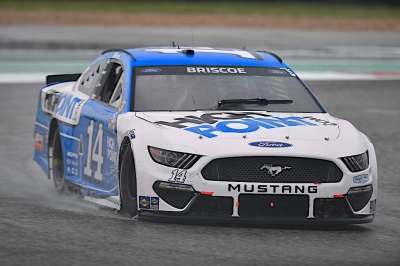 ● After dropping to the rear of the field on the pace laps due to an engine change, the No. 14 elected to start the race on slicks. However, as the drivers were approaching the initial green flag, Briscoe reported the track conditions had changed and it would be difficult to maneuver the course without wet-weather tires.

● Crew chief Johnny Klausmeier called the HighPoint.com driver to pit road upon completion of lap one, and Briscoe received four wet-weather tires. He advanced quickly up to the 20th position on lap four, as Klausmeier radioed that the No. 14 was the fastest car on rain tires.

● Briscoe was scored 19th when the first caution of the race occurred on lap nine. He stayed on track when several cars pitted and inherited the 11th position. When the race returned to green on lap 10, he moved into the seventh position.

● The No. 14 narrowly avoided trouble with two laps remaining in the stage, and Briscoe held on to finish Stage 1 in seventh.

● At the break, Briscoe reported his racecar’s turn got progressively worse and the front turn was worse. He pitted under caution for four tires, fuel and adjustments. The No. 14 was the first car off pit road of those that made a stop, but with leaders staying on track, Briscoe lined up 23rd for the second stage.

● The HighPoint.com driver gained six spots on the restart at the beginning of Stage 2 to sit 17th when the yellow caution flag waved on lap 19. Briscoe stayed on track while several cars elected to pit, and he lined up 10th for the restart on lap 25.

● The field completed just one lap before the yellow flag was displayed again, with Briscoe scored 13th. The field then was parked under a red flag for close to 21 minutes, with Briscoe updating the team that he couldn’t see anything due to the wet conditions. When the race returned to yellow-flag conditions Briscoe did not pit, restarting 10th for the final four laps in the stage.

● The HighPoint.com driver battled for position over the closing laps and finished the stage in ninth.

● The rookie driver steadily worked his way back up to the top-five before making his final pit stop of the race under green-flag conditions on lap 45. He received fuel and a chassis adjustment after requesting more forward drive and telling the HighPoint.com team that he was too tight on the left-hand turns.

● Briscoe returned to the track in 14th and advanced to sixth as green-flag stops cycled through.

● With 14 laps to go, the sixth caution of the race and second red flag was shown for weather with the HighPoint.com Ford Mustang scored sixth.

● Briscoe earned his first top-10 finish of the season when NASCAR determined the race could not continue.

● Briscoe earned his first top-10 in the NASCAR Cup Series, and it came in his 14th career start.

● This was Briscoe’s best finish so far this season. His previous best result was 11th place, earned twice – April 25 at Talladega (Ala.) Superspeedway and May 9 at Darlington (S.C.) Raceway.

“I always want to do a little better, but running sixth and having a solid day from start to finish, and getting stage points, was what we needed to do. I felt like this was going to be a really good opportunity for our HighPoint.com team, just based off the past when every time we go to a new track it ends up going well for me. I noticed when we’d get some rain that would help, and we just continued to get better throughout the day after starting in the back because of the transmission deal. My background in dirt racing for sure plays a role in that. All the sprint car and dirt car guys always try to figure it out in situations like this when it’s low grip and really slick. We’re so used to having to search around for grip. I don’t think I ran the same line twice, because I was constantly moving around. Tony (Stewart) and Jeff (Gordon) were always good at that, and now you see it with Kyle Larson and those guys that run up front. We fought all day long and had a solid day. We need to do more of that, and hopefully this builds up team confidence heading into Charlotte.”