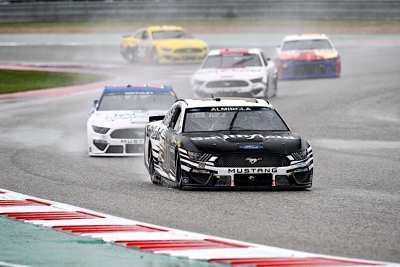 ● Rain began to drop early in Stage 1. The Smithfield Ford driver opted not to pit while others pitted for wet tires.

● Due to the pit cycle, he was ranked as high as 10th place before a caution on lap seven.

● Almirola pitted during the caution for four fresh rain tires, fuel and adjustments.

● He restarted 30th but said his windshield wiper was not providing drivable conditions.

● Almirola held the Smithfield Ford in 32nd before the stage ended. Then he pitted for four fresh tires, fuel, a windshield tear off and adjustments to correct loose-handling conditions.

● The caution for a multicar accident was called on lap 20.

● He restarted 15th, but the red flag was waved on lap 26 for another accident that Almirola narrowly avoided.

● Almirola drove to 19th before pitting under green-flag conditions on lap 43 for four tires, fuel and adjustments.

● Almirola raced in and around the top-20 before the caution was called again for inclement weather on lap 54.

● Due to increased inclement weather and potential lightning, NASCAR called the race short.