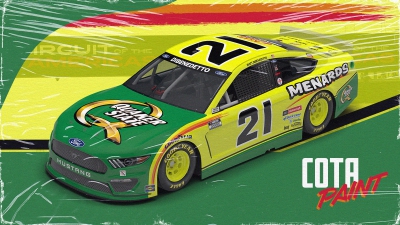 Matt DiBenedetto and the No. 21 Menards/Quaker State Mustang will be a part of the inaugural NASCAR race at the Circuit of the Americas, a 20-turn, 3.41-mile road course in Austin, Texas.

The COTA track opened in October, 2012, and has hosted several major series including Formula One and IndyCar, but this weekend will mark the first appearance there of NASCAR’s top three divisions.

DiBenedetto has yet to compete on the COTA layout, but that doesn’t mean he hasn’t been busy preparing for Sunday’s 68-lap, 231-mile EchoPark Texas Grand Prix.

“I’m excited for COTA,” he said. “It’s a beautiful facility, and I’ve been wearing out the Ford simulator.”

Unlike most Cup Series races the past two seasons, DiBenedetto and the Menards/Quaker State crew will get a chance to fine tune their Mustang during a practice session on Saturday.

“I’m looking forward to having practice to try and work on improving our road course program and hopefully be dialed in for the race,” he said. “And I will be paying close attention to the truck and Xfinity races.”

Inaugural NASCAR races in the state of Texas are nothing new for the Wood Brothers.

They competed in the first-ever NASCAR race at Texas World Speedway (then known as Texas International Speedway in College Station back on Dec. 7, 1969). Cale Yarborough was aboard the No. 21 Mercury when it blew a tire and slammed into the wall on Lap 143 after leading 16 laps earlier in the race. The impact shattered Yarborough’s shoulder blade. Author Greg Fielden, in his Forty Years of Stock Car Racing, quoted one of the doctors who treated Yarborough. “When this bone is broken this badly, usually the patient is dead. It’s a miracle he survived such a hard crash.”

Eddie Wood said Yarborough was still on the mend early in the 1970 season. “That crash at Texas is why Parnelli Jones drove our car at Riverside in 1970,” he said.

Yarborough was back in the car quicker than doctors expected and was as fast as ever. He set a new track record of 194.015 miles per hour to win the pole for the Daytona 500 then won his qualifying race at a then all-time race record of 183.295 mph. He dominated the early laps of the Daytona 500 but dropped out early due to mechanical issues.

The Woods fielded the No. 21 Ford driven by Michael Waltrip in the inaugural race at Texas Motor Speedway near Fort Worth on April 6, 1997. Waltrip finished ninth, the first of six top-10 finishes for the team at that track.

Eddie Wood said that was a memorable day.

“They had a big wreck on the first lap,” he said. “And there was a huge crowd there. There was so much traffic we wound up taking a helicopter out of the infield to get to the airport.”