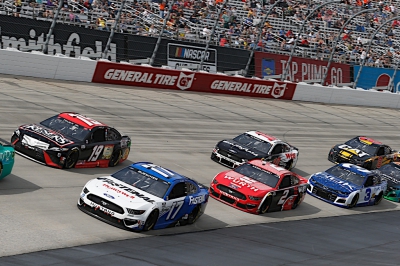 After earning stage points in the first stage of racing, Chris Buescher and the No. 17 Fastenal team finished 17th at Dover International Speedway on Sunday afternoon.

Buescher rolled off the grid in 10th and was up to ninth when the competition caution flag waved at lap 35. The team took four tires, fuel and an air pressure adjustment before getting back on track to restart fifth. The driver stayed inside of the top-10 for the majority of the stage, falling to ninth with 11 laps left in the stage. Buescher took the green-white checkered flag for stage two in ninth, earning two stage points.

At the stage break, Buescher pitted for four tires and more adjustments to free up his car. The driver restarted fifth after the choose cone and was quickly shuffled back to ninth when a caution flag waved at lap 171. The team restarted eighth, but fell down to 14th as the No. 17 machine handled tighter as the laps of the stage wound down. The Prosper, Texas native finished stage two in 15th.

The 2015 Dover Xfinity Series winner pitted at the stage break for a track bar adjustment, fuel and more fresh tires, holding track position until dropping back to 19th around lap 267. The stage’s first caution flag waved a few laps later and the team elected to stay out for track position to restart 15th.

Soon after the race went back to green, another caution flag waved for debris. Buescher came down pit road for fuel, air pressure adjustment and more tires before restarting 15th. The final caution of the day came soon after going green again at lap 325. Scored 18th, the team pitted for four fresh tires and restarted 18th. As the final 75 laps ticked by, the driver was able to pick up one more spot to take the checkered flag in 17th.

Buescher and the No. 17 team return to action next Sunday, May 23 for the inaugural Cup race at Circuit of the Americas at 2:30 p.m. EST on FS1, PRN and SiriusXM Channel 90.