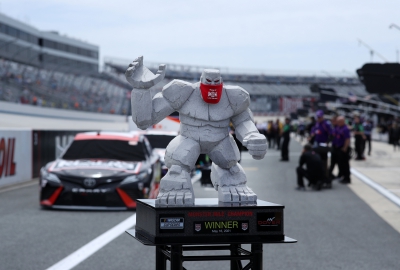 After leading 94 laps of the 400-mile race, Alex Bowman reigned victorious at Dover, marking his second win of the 2021 season. The win also marks Bowman’s first career win at the track and Hendrick Motorsports’ twenty-first win at Dover. Notably, Hendrick Motorsports managed to secure a 1-2-3-4 finish, which has never happened for the organization.

“We won Richmond and had a rough couple of weeks there. We are still the same team that did it at Richmond. I am so pumped for Ally. It is so cool to get the 48 in victory lane after how many races this car has won at Dover,” Bowman told FOX Sports, following the race.

NASCAR, once again, set the starting lineup for the race by their metric qualifying formula. This system allowed Martin Truex Jr. to start from the pole position, alongside his teammate Denny Hamlin. Notably, only three competitors were forced to forfeit their starting positions and start from the rear. Chase Elliott was forced to start from the rear due to a two-time pre-race inspection failure. Similarly, Ryan Newman was sent to the rear for an unapproved adjustment. Meanwhile, Josh Berry, who filled in for Justin Haley, was sent to the back due to the driver change.

At the drop of the green flag, Truex took off with the lead until William Byron moved past him on lap 15. Byron remained in the lead until the scheduled competition caution waved on lap 35. Kyle Larson gained the lead off pit road. Meanwhile, Tyler Reddick and Michael McDowell suffered speeding penalties. Additionally, Kyle Busch’s team discovered an issue with his valve spring, which went on to become a major deficit to his day.

Back under green, Larson was able to maintain his lead on the restart. Larson went on to dominate the stage, leading a total of 83 laps en route to his stage one win. The first stage ended under caution, as Chase Briscoe made heavy contact with the wall on the final lap of the stage.

To start stage two, Larson picked up right where he left off. Larson continued in the lead until lap 171 saw the first incident-related caution of the day. Josh Berry was the cause of the caution. While pitting, Ryan Blaney was forced to pit early to address damage from a piece of debris that was wedged in his car. This issue forced Blaney to restart from the back of the lead lap cars. Meanwhile, Larson was, again, the quickest off pit road and held his lead on the restart. Larson scored the stage two win on lap 240. This stage win marked Larson’s sixth stage win of the season, the most of all drivers.

Larson held his lead off pit road and on the restart to begin the final stage of the race. Larson was in a league of his own until the yellow flag appeared on lap 301 for Aric Almirola. Almirola was in thirteenth at the time in which he slammed into the wall. The damage brought an end to a solid day for Almirola’s team. On pit road, Alex Bowman’s pit crew propelled him into first for the fifth restart of the day.

Bowman held the lead until the yellow flag waved again on lap 313. The caution stemmed from Anthony Alfredo’s spin after receiving contact from Ricky Stenhouse Jr.

Following the caution, Bowman worked to stretch his lead until debris put a pause on the race with only 75 laps to go. However, Bowman picked up right where he left off on the restart and cruised to victory.

After leading a total of 263 laps throughout the day, Larson trailed Bowman by a margin of 1.233 seconds. Meanwhile, rounding out the remainder of the top-five was Chase Elliott, William Byron, and Joey Logano.

Next Sunday (May 23), the NASCAR Cup Series will be back in action for their debut at Texas’ Circuit of the Americas. Be sure to tune into FS1 at 2:30 PM ET for all of the road course action.