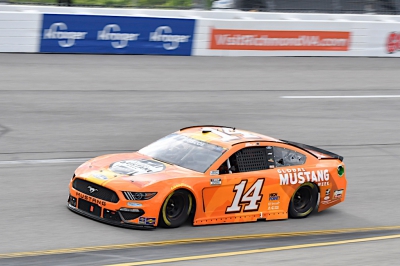 ● Briscoe was running 24th at the lap-30 competition caution and reported the Global Mustang Week Ford was tight across center, hurting his drive on exit. The team made a pit stop for four tires, fuel and a chassis adjustment, with Briscoe lining up 23rd for the restart on lap 37.

● The Ford Mustang driver advanced to the 21st position and was just shy of passing for 20th as the green-and-white checkered flag was shown on lap 80 signaling the end of the first stage. Briscoe said the previous adjustments helped but he still needed better turn in the center of the corner. Crew chief Johnny Klausmeier called his driver to pit road for tires, fuel and another wedge adjustment.

● The No. 14 elected to make a scheduled green-flag pit stop on lap 137, giving Briscoe fresh tire and a chassis adjustment for the Global Mustang Week Ford, which had become too free. He returned to the track in the 26th position but was caught a lap down when a caution occurred on lap 140.

● Briscoe restarted 23rd, one lap down, and was 19th before making his next scheduled green-flag pit stop on lap 186.

● The Global Mustang Week Ford was scored 26th after green-flag stops cycled through, and Briscoe advanced to the 22nd position before the end of Stage 2.

● At the stage break, Briscoe pitted for four tires, fuel and adjustments and lined up 21st for the final stage.

● The leaders began scheduled green-flag stops on lap 287 with Briscoe following suit, giving up the 22nd position. He received tires, fuel and adjustments to aid with a tight-handling Global Mustang Week Ford. Once everyone made stops, Briscoe found himself running 21st, three laps down.

● Briscoe made one final scheduled green-flag pit stop on lap 340 after reporting he was “sliding the front tires,” and he rejoined the field in the 22nd position.

● When the final caution of the race occurred on lap 382, the No. 14 chose to stay on track, gaining back a lap. Briscoe restarted 21st, two laps down, and battled for a top-20 finish over the final 12 green-flag laps before crossing the line 22nd.

●  Alex Bowman won the Richmond 400 to score his third career NASCAR Cup Series victory, his first of the season and his first at Richmond. His margin over second-place Denny Hamlin was .381 of a second.

●  There were five caution periods for a total of 39 laps.

●  Hamlin remains the championship leader after Richmond with an 81-point advantage over second-place Martin Truex Jr.

Chase Briscoe, driver of the No. 14 Global Mustang Week Ford for Stewart-Haas Racing:

“Richmond is always a tough place for me, but I felt like we had a decent day despite what the results show. We still have work to do, but half the battle has been trying to overcome our starting position and the early caution pinned us a lap down. Johnny and the guys have been doing a great job listening to my feedback, and we’ll continue to work on our short-track program so we’re better when we come back in the fall.”