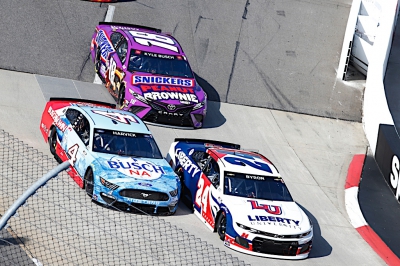 ●  The No. 4 Busch NA Ford Mustang was ninth when NASCAR waved the red flag for rain after 42 laps.

●  When racing resumed on Sunday, it came under a sun-filled sky and temperatures in the low 70s.

●  Harvick initially held steady in ninth, but by lap 72 he keyed his mic and said only, “Super tight!”

●  “Horrendously tight. We need to take a huge swing here,” said Harvick at the end of the stage.

●  Four tires and fuel, along with a massive track bar adjustment, two spring rubbers in the right rear, one spring rubber out of the left rear, and tire pressure adjustments were made during the stop.

●  Bubba Wallace and Harvick bumped and banged through turns three and four on lap 155. Both emerged OK, with Harvick in 19th.

●  Harvick steadily wheeled his No. 4 Busch NA Ford Mustang forward, climbing to 14th by the time a caution came out on lap 242.

●  “I started off loose. As I ran, it go too tight in the center (of the corner) and I lost all my drive,” said Harvick during the caution.

●  Harvick pitted for four tires and fuel on lap 242. Quick pit work returned him to the track in 13th for the lap-248 restart.

●  Harvick’s car didn’t take off as expected on the restart, and he lost two spots in the scramble to the end of the stage.

●  Pitted for four tires and fuel at the end of the stage, with adjustments to tire pressures.

●  An early caution on lap 290 allowed Harvick to pit for four tires and fuel, but some drivers stayed out. Harvick had been running 15th, but ended up 17th for the lap-296 restart.

●  Another caution on lap 321 provided another opportunity to work on the No. 4 Busch NA Ford Mustang. “Need a touch of forward drive for track position," said Harvick.

●  Four more caution periods followed, and on lap 372 while under caution, Harvick said, “I feel like a pinball. Been in the wrong lane every time.”

●  Harvick pitted for four tires and fuel while under caution on lap 373. Was 15th for the lap-378 restart.

●  Grabbed 11th with a three-wide dive to the inside of cars entering turn one on lap 380.

●  Passed Wallace on lap 383 to re-enter the top-10 before another caution for a multicar accident on lap 387 that resulted in a nearly 22-minute red-flag stoppage.

●  With only nine laps of green-flag running on his tires, Harvick stayed out and lined up seventh for the lap-397 restart.

●  Christopher Bell, on slightly better tires, got by Harvick, but the Busch NA driver remained solidly in top-10 by running eighth.

●  Harvick earned the spot back on lap 429 by passing Joey Logano for seventh.

●  A caution on lap 453 allowed Harvick to pit on lap 454 for four tires and fuel with a right-rear wedge adjustment. “I’m lacking forward drive when I go to the throttle,” said Harvick prior to pitting.

●  “Just lost grip those last two runs,” said Harvick as he crossed the stripe in ninth.

●  Harvick earned his sixth top-10 of the season and his 20th top-10 in 40 career NASCAR Cup Series starts at Martinsville.

●  Martin Truex Jr., won the Blue-Emu Maximum Pain Relief 500 to score his 29th career NASCAR Cup Series victory, his second of the season and his third at Martinsville. His margin over second-place Chase Elliott was 1.972 seconds.

Kevin Harvick, driver of the No. 4 NA Ford Mustang for Stewart-Haas Racing:

“We just maintained today. I got one good restart and then went too loose at the end.”

The next event on the NASCAR Cup Series schedule is the Richmond 400 on Sunday, April 18 at Richmond (Va.) Raceway. The race begins at 3 p.m. EDT with live coverage provided by FOX and SiriusXM NASCAR Radio.