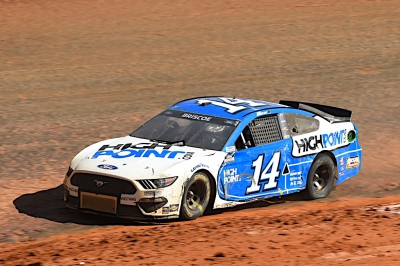 ● After starting 25th, the HighPoint.com Ford Mustang driver made his way to the top-20 during the first 10 laps.

● An accident on lap 40 resulted in the first caution. Briscoe was in 20th place. He reported that the HighPoint.com Ford Mustang needed to turn better through the corner.

● Green-flag racing resumed with Briscoe in 19th place. He was in 14th when he was caught up in a multicar accident on lap 47. The incident resulted in sheet metal damage, along with what he believed to be some slight suspension damage. The team elected to stay out, which placed Briscoe in 14th for the restart on lap 51.

● Trouble arose for Briscoe again one lap later when another car made contact with the right side of his racecar. The team elected to pit because of concern that the right-rear quarter panel would rub against the tire. This placed Briscoe in 28th for the restart.

● Briscoe was in 25th place when race leader Martin Truex Jr. placed him a lap down on lap 98. With only two laps left in the stage Briscoe was able to maintain the position of being the first car one lap down. This placed him back on the lead lap to start Stage 2.

● The HighPoint.com Ford Mustang driver was scored in 25th to start Stage 2. Because he was the free pass car from the previous caution, he had to start at the tail end of the longest line.

● It was all business for Briscoe as he quietly logged laps during the first 50 circuits of Stage 2. He was in 20th place when the competition caution waved on lap 150. He told his team that the No. 14 HighPoint.com Ford Mustang wasn’t bad and encouraged them to continue in the same direction with adjustments.

● Briscoe was in 17th place on lap 159 when he slowed to avoid cars colliding in front of him. He was hit from behind and spun, causing even more damage to the HighPoint.com Ford Mustang. Briscoe had to make multiple trips to pit road for repairs. He was able to stay on the lead lap and restarted the race in 27th.

● Because of limited visibility, Briscoe played it safe during the final laps of Stage 2 to finish in 27th.

● Despite a visibility issue, Briscoe set to work at the start of the final stage, quietly logging laps.

● The leaders set a brisk pace during the final stage. Without a caution it didn’t take long for the frontrunners to catch the tail end of the field. Briscoe was in 21st place on lap 237 when race leader Joey Logano sent him a lap down.

● Caution was displayed for an accident with less than 10 laps to go, with Briscoe running in 20th place. Green-flag racing resumed on lap 251, setting up overtime.

● Briscoe lined up 20th for the restart and maintained the position to the checkered flag.

● This was the first dirt race in the NASCAR Cup Series since Sept. 30, 1970, at the North Carolina State Fairgrounds in Raleigh where NASCAR Hall of Famer Richard Petty took the 117th of his record 200 career NASCAR Cup Series wins.

● Joey Logano won the Food City Dirt Race to score his 27th career NASCAR Cup Series victory and his first of the season. His margin over second-place Ricky Stenhouse Jr. was .554 of a second.

● This was Ford’s 707th all-time NASCAR Cup Series victory and its third win of 2021. It is the manufacturer’s 101st all-time dirt victory, with Logano being the 30th different driver to win a Cup Series dirt race in a Ford. NASCAR Hall of Famer Ned Jarrett, who is Ford’s all-time leader in Cup wins with 43, also holds the record for most dirt wins for Ford with 26.

● Only 19 of the 39 drivers in the Food City Dirt Race finished on the lead lap.

● Denny Hamlin remains the championship leader after Bristol with a 58-point advantage over second-place Logano.

“That was not the race we wanted for our HighPoint.com Ford Mustang. Obviously, we had high expectations for this weekend. After running the Truck Series race earlier today I knew it was going to be a challenge. A lot of what happened there was out of our control with the accidents. We actually were heading in the right direction there in Stage 2 but, once again, got hit from behind and just never really recovered from it. I’m just looking forward to the week off before we head to Martinsville.”

The NASCAR Cup Series takes a rare weekend off before returning to action April 10 at Martinsville (Va.) Speedway for the Blue-Emu Maximum Pain Relief 500. The race begins at 7:30 p.m. EDT with live coverage provided by FS1 and SiriusXM NASCAR Radio.