Bush's® Beans Back to their Roots with JTG Daugherty Racing 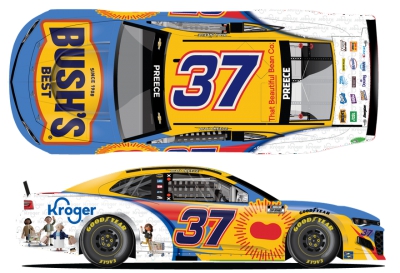 JTG Daugherty Racing and Bush’s® Beans have been partnering for 20 years, one of the longest running relationships in NASCAR. The No. 37 Bush’s Beans/Kroger Chevrolet Camaro ZL1 1LE and driver Ryan Preece will be showcasing the new design for Bush’s as That Beautiful Bean Co.™ at Bristol Motor Speedway for the Dirt Race this Sunday.

Team owner Tad Geschickter said, “We’re excited to be celebrating our partnership with Bush’s and the new paint scheme of That Beautiful Bean Co. at every turn on dirt at Bristol Motor Speedway.”

Founded in Chestnut Hill, Tenn., Bush’s Beans calls Bristol Motor Speedway their home track and they are looking forward to the NASCAR Cup Series hitting the dirt for the first time in over 50 years.

“I have some history with Bush’s and Bristol. Back in 2015, I won the first Bush’s Beans 150 at Bristol and have that trophy sitting on a shelf at home. I hope some of that luck carries over to this weekend” Ryan Preece said. “Bush’s headquarters is only an hour and a half away so it’s no wonder Bristol is a special place for them. Because of all that, you do put more pressure on yourself. You want to do well for your partners in their house. It’s a big unknown going into this dirt race for a lot of us, but we’re going to go have some fun out there with the Bush’s Beans car and enjoy playing in the dirt.”

More than 20,000 cubic yards of dirt created the temporary dirt track surface. Everyone is anxiously awaiting first practice to kick things off for the NASCAR Cup Series on Friday at 4:05pmET on FS1 and here’s a look at the weekend schedule: NASCAR race times, TV, results for Bristol Dirt weekend | NASCAR.com

“This is one race you’re not going to want to miss, and I’ve been using the iRacing simulator to help prepare because I may have been 12 years old the last time I raced on dirt,” Preece said. “We raced virtually in the iRacing Bristol Dirt Race the other night and I won the Heat to transfer into the main event. I think I’ve probably logged a thousand of laps on that simulator to get ready. Ricky’s (Stenhouse, Jr.) has got a ton of experience dirt racing, so we’ve been leaning on each other a little bit. Let’s roll that beautiful bean footage!”